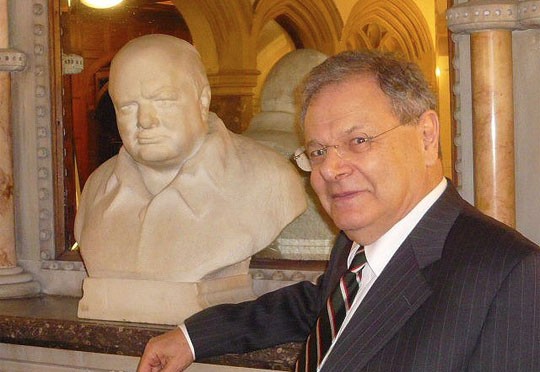 The late Sir Martin Gilbert (1936–2015) passed away in February. Since then his widow, Lady Esther Gilbert, has overseen the redesign of his official website as a lasting tribute to her husband. Sir Martin was a prolific historian and the premier Churchill scholar of his time. His eighty-nine books include not only six of the eight volumes in the Official Churchill Biography but dozens of books about twentieth-century history and Jewish history. The website provides a splendid guide to Sir Martin’s own life and work.
The website provides a complete directory to all of Sir Martin’s books including excerpts from each and links to order copies in both electronic and print format. The books are grouped by theme making it easy for readers to find all of his books about Churchill. There is also biographical information about the great historian and many fascinating blogs that he posted over the years. Sir Martin met many of the great and the good of the twentieth century. One example of how this informed his work is explained in his essay about J.R.R. Tolkien.
Twenty-six year old Martin Gilbert’s first elected academic position was at Merton College, Oxford in 1962. Tolkien, only then starting to become famous for his fantasy writing, was an Emeritus Fellow of the college. Over meals at High Table and with much reticence Tolkien began to open up to his young colleague about his experiences on the Somme during the First World War. These vivid accounts helped Gilbert understand and explain the battle in his own writings about the conflict including Churchill’s time in the trenches in early 1916.
Chartwell Bulletin: July 2015
Sir Martin Gilbert is the official biographer of Winston Churchill and a leading historian on the Twentieth Century, who, in his 88 books has shown there is such a thing as "true history".