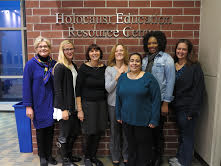 How to give teachers background in the Holocaust to inspire their own teaching of it? Dr Harriet Sepinwall at the College of Saint Elizabeth in Morristown, New Jersey, uses Sir Martin’s book The Holocaust, to train teachers on the Holocaust. Read the responses of these teachers ….

“Anyone reading the book comes away with a full understanding of the experiences of European Jews in the Holocaust. You also come away with a full and perhaps heavy heart. A heart full of wonder at the strength of the human spirit; of the will to endure the unendurable and the grit to keep on going to give witness to the events that happened, to ensure that they are not forgotten and that they will never happen again. A heart saddened by ‘man’s inhumanity to man’ but also uplifted by the resistance and sprit of renewal and strength of survivors.” Maraid Mukaida

“As an arts educator committed to interdisciplinary learning strategies and the use of performance as a tool of advocacy, this text has been vital to me. Its vivid narrative structure makes the content transferrable to any subject. Teachers will be able to clearly communicate accounts about the Holocaust in detail and students will in turn have a more concrete understanding of the psychological and physical effects that this atrocity had on its victims.

“Although I will explore other writings by Gilbert, I highly recommend this particular text as a reference for educators, scholars and those seeking to delve into the experiences of Jews during the onset of the Holocaust and the unfolding of events during World War II.” Zakiya Atkinson

“I have gained tremendous insight on the Holocaust because of Martin Gilbert’s work. His research is impressive and his writing is beautiful. I couldn’t think of a better person to tell the story of the Jewish people of the 20th Century and to record their memory for future generations to come. Thank you Sir Martin Gilbert for the gift you leave behind for all of humanity.” Michele Bellomo

“Sir Martin Gilbert was a historian and author who published 88 books. … One of these is The Holocaust: A History of the Jews of Europe during the Second World War, and when I purchased it, I honestly was scared of reading it because of the thickness of the book. After reading a few pages I realized how interesting the book would be and it was definitely an easy read. One thing I found amazing and very helpful to keep track of the Holocaust was Gilbert adding the year of what he was explaining on the top of the pages. Many times books jump back and forth but this one had the chapters in chronological order. This definitely helped keep track of what exactly was happening in Europe at the time. Actually, not only during the Holocaust, but Sir Martin opened his book explaining the past of the Jewish people, beginning with Martin Luther’s ideas in 1543. This answered many of my questions on why were the Jews attacked and murdered during the Holocaust. I knew about the Holocaust and have taken courses on it, but did not know the history behind the attacks on Jews.” Susana Monteiro

“In The Holocaust Gilbert takes the reader through the history of ancient hatreds of the Jews and how this hatred manifested and became the underlying cause of the Holocaust. He focuses on both the perpetrators plans for ‘the final solution’ and the escalation of restrictions, violence and murder of the victims. He accomplishes this through carefully researched and chosen survivor testimony. Bringing a voice and a face to history makes a topic much more understandable to the learner and makes much more of a lasting impact.” Elizabeth Dick

“Martin Gilbert has given a face to the victims through the stories told in the book and his superior writing. As a mother of two girls under three years of age, I am super sensitive to the recounts of children. Many times I have wanted to skip entire pages because I am sure I know of the impending doom to come. Gilbert makes me persevere. I have to continue because I will not allow a survivor’s words to be lost on me. I will not be the person who is unable to read the horrific events that one lived through. I feel like I have gained a badge of courage with reading each experience.

“I am also a 7th grade writing teacher in Newark, New Jersey. I work tirelessly to have my students “show, not tell” or write with feeling. This is such a struggle to pursue for five paragraphs, I am in awe of a writer who can paint picture after picture for over eight hundred pages.” Meghan McNamara

From Professor Sepinwall to her students: “While at times it may have been daunting to have so much to read, do, and process, it was quickly apparent that using Gilbert’s book as one of the main resources for our course was the best choice for us.  Your comments in class and your own writing demonstrated that you gained so much from Gilbert’s work that included well-documented survivor testimony.

“Gilbert was a ‘historian with a heart’, and he gave a face’ to the tragedy of the Holocaust. I feel confident that in your own teaching, you will do all you can to use this approach.  Your students will come closer to ‘understanding’ what happened, recognize the effects of intolerance and hatred of ‘the other’, and use what they learn from you (and the resources you use) to help make this a better world … where all people are valued and ‘never again’ can become a reality.”

The Teachers: Dr Langan teaches Contemporary Genocide; Dr Sepinwall teaches the History of the Holocaust in the College of Saint Elizabeth Graduate Certificate Program in Holocaust and Genocide Education; all students are high school teachers in New Jersey, except Meghan McNamara who teaches writing to 7th graders (age 13).