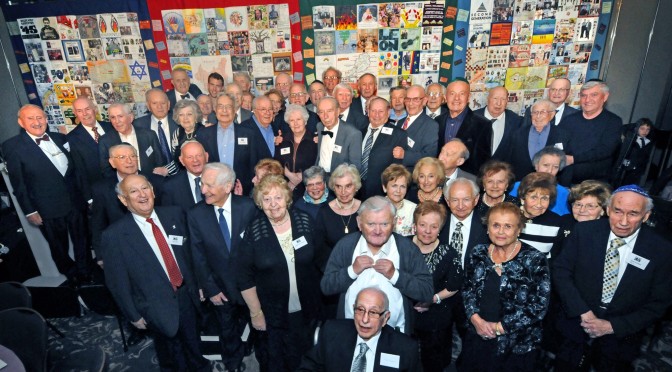 In the summer of 1945, the British government agreed to allow the Jewish organisation, the Central British Fund, to bring a thousand young orphaned survivors of the Holocaust to live in Britain. Only 732 children and teens could be found among those liberated in Theresienstadt and from camps in Germany. Though there were some girls among them, mainly they were boys, and they called themselves “The Boys”. They were given refuge in the Lake District and in South-East England where they had the opportunity to build not only their lives but a close connection with each other as together they learned to trust and to live.

As they completed their education and began their lives, The Boys continued to meet regularly and formed the ’45 Aid Society, to help each other. Eventually the Society developed into a charity to help others in need. In 1996, Martin, after having been their honourary president for many years, included the stories of 165 of them in his book The Boys, Triumph Over Adversity. Though many of the survivors are now gone, it is their children and grandchildren, the Second and Third Generations who carry on their work.

Every year The Boys hold a reunion dinner to celebrate their survival, as close as possible to their May 8th liberation.  About ten years ago I accompanied Martin to two of the dinners.  He was always struck by how these men became like children again, when they got together.  After Martin took ill I was invited, but I only went one year, as I found it too difficult without him.  Last year I had been in touch with the Second Generation (and with their inspiration I was able to bring the book, The Boys, Triumph Over Adversity, back into print) and they invited me as their guest.  I believe last year’s was the first reunion the Second Generation organised as the few remaining survivors are getting quite elderly.  I felt they really wanted me to come and I was touched by that.

The atmosphere at the dinner was one of a great family celebration, except it was many families – 300 people in all.  These reunions have taken on a life of their own and there is certain flow or pattern to the evening: they have photographs taken, have music, dance together, and of course eat.  Last year they showed a film of earlier reunions. During the screening of the film, two or three tiny children were playing on the dance floor in front of the screen.  I watched the film with tears in my eyes:  the film with the survivors, many now gone, celebrating and being together; while their youngest descendants ran round, laughing and dancing, as years before their own small children would have been playing at their feet.  The film showed some of the charitable work they have done.  Then there were group photographs of the remaining survivors (22 I think), and also with their families. And then, more dancing.

I was completely bowled over by the atmosphere.  It was the only Holocaust event I have ever witnessed where the focus was not about loss but was a great celebration of life and love and family and joy.  The glue holding them together was their shared history, but if anything it was also their great appetite for happiness, even more palpable by knowing what they had experienced.  To me it was the greatest measure of success against their oppressors and those who murdered their families.  These children grew up together, they helped each other and others, they remained close, and they celebrate life.  So now do their children and grandchildren and great-grandchildren who carry on the closeness and strength, even as many of The Boys have now died.

The Boys were children when their worlds fell apart. They witnessed unimaginable horrors.  They were brought together and rehabilitated together and together learned to live and to love. Other survivors had to find their way back to life on their own, among people who could not understand what they had witnessed and experienced, among people who did not necessarily want to know what had happened to them.

The past is always there but it doesn’t have to have a death grip on the present.  To know their story and to see how they lived their lives, and brought up their children:  it is hopeful, life affirming and their greatest gift to us.  From the depths of what they had experienced, and how they were able to go forward and live their lives, creating something positive from the devastation of their childhood – that’s what I learned from The Boys that evening.