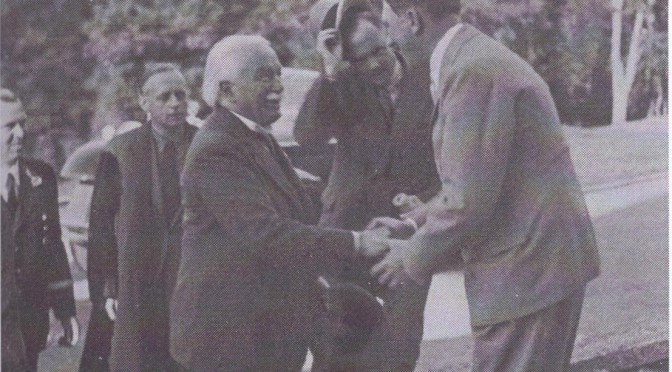 Photo:  Karl Huhle’s photo of Hitler descending the stairway at the Berghof near Berchtesgaden to meet the former Prime Minister Lloyd George in September 1936; the interpreter Paul-Otto Schmidt is in the centre, lifting his hat, and Joachim von Ribbentrop at the left.

“I am researching T.P. Conwell-Evans ….”

About six months after Martin became ill, an email came in to his website from a PhD student looking for information.  Historical enquiries like this come in often.  Martin always answered his correspondence, and took such enquiries seriously.  When he became ill, answering his emails became part of my daily task, in the least to say he was not able to respond and if possible to refer the questioner to someone who might be able to help.

Fast forward two years.  Martin had died.  I had asked Janet Foster, an archivist, to make some sense of the papers Martin had gathered together that then filled the walls in three rooms.  One afternoon Janet deposited on my desk two boxfiles and said they were about a friend of Martin’s, who had made Martin his literary executor.  The name, Conwell-Evans, meant nothing to me but that evening I looked through the boxfiles.

Among the papers, letters, documents and notes were four photocopied pages in Martin’s hand, his copy of a letter of condolence Martin had written to Pamela Turner, Conwell-Evans’s niece, after he died.  Among the heartfelt outpourings of grief that Martin had felt toward this man was this:

“T.P. played an important part in our history – and sooner or later it will be recognised.  He suffered more than anyone I know from the sneers and accusations of those who did not know his true achievements.  When I first met him, I was one of those who believed that he had betrayed his country:  over the years I have collected evidence absolutely refuting these charges.  To the contrary, he did things for our country of which no man need be ashamed – and few could parallel.”

I sat in the evening glow with this letter in my hand.  I knew if nothing else I had to track down the PhD student to see if these two boxfiles of papers could be of help to him.  But it had been two and a half years.  He might well have finished his PhD and gone on to gainful employment.  Still it was worth trying.

Luckily “Conwell-Evans” was an easy search in my email folders and I hesitantly approached the student, Charles Spicer with the news that I had some papers, hoping it was not too late.  Within a few days Charles turned up at my door taking both of us by surprise.  I was expecting a young student (though at my stage in life now everyone is “young”) and Charles seemed like someone who had already found gainful employment, and was what we called years ago a “mature” student.  And no doubt he was expecting a Lady Gilbert who had the proper lilt of a British lady.

Charles poured over the boxes and told me there were things there he had not found anywhere else – and he knew because he had looked.  He tried patiently to explain to me the pre-war Anglo-German Fellowship which Conwell-Evans had been instrumental in forming and developing.  Their hope was that by befriending the Nazi leaders the threat of war could be averted.  Their failure was not in their lack of efforts but in the duplicity of the Nazi leadership, especially the leader whose words spoke of peace while his actions were preparation for war.

The words in Martin’s letter to Pamela Turner then made sense, and the documents and letters and notes in the boxfiles contained the evidence.  It was what Randolph Churchill, while working on his father Winston’s biography, called “good grub”, the documentary evidence on which “true history” is written.

Charles received his PhD and has now written Coffee with Hitler on the Anglo-German Fellowship, on Conwell-Evans’s role in it, on what was attempted, what was achieved, and what hopes and beliefs were dashed when war broke out.  Adding to the disappointment that their efforts had not succeeded were the “sneers and accusations” of those who blamed them afterward for betraying their country.

Martin ends his letter to Pamela Turner with an offer:  “If it interests you at all, I should be glad to repay his friendship by telling a niece something of his real achievements ….”  Conwell-Evans is gone.  Martin is gone.  Pamela Turner is gone.  The documents remain, Martin’s paper trail.  “Sooner or later” the recognition, as Martin writes in his letter, has come.  As Martin would say:  “It’s all in the archives.”  Now, with the next generation of researchers, it is part of History.