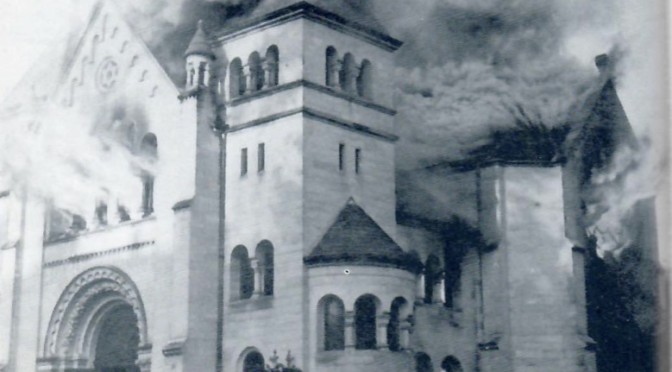 I remember the look on Martin’s face when he told me. It was pure astonishment on his part, and he had been the detective, unaware of what he was to uncover.

Amanda Foreman (who had known Martin since her childhood) and Lisa Jardine had approached Martin about a book on Kristallnacht for their “Making History” series. Martin and I talked about how the book should begin. He, a fervent believer in chronology, felt it should begin with the Nazi rise to power. In the end, he began it with eyewitness accounts of the pogrom itself; its background comes into the story only after the description of what had taken place. It is only in Chapter 5, “Bitter Prelude” where we get the lead-up to the events themselves, followed directly by the “Harsh Aftermath” chapter, and then his chapters on those who were able to help, those who were able to escape, and how the Nazis used what they learned from this pogrom to their effect in the Holocaust that was to follow.

While going through his voluminous sources, Martin came to the realisation that the extent of damage during Kristallnacht was far greater than had previously been recorded and accepted as fact. Jewish businesses and homes were destroyed; 30,000 Jewish men were arrested and taken to concentrations camps. And synagogues were attacked and burned. But it was not “hundreds” of synagogues destroyed, as previously thought. He told me, in shock at the realisation: “It was every synagogue. Every synagogue was destroyed.”

Martin, to try to understand what this meant, set out to map the places within Germany’s 1938 borders where synagogues had been destroyed. It took him 10 maps, and he only maps the town or city where a synagogue was destroyed, not the specific locations within cities where there had been more than one synagogue.

Anyone who writes of Kristallnacht that 191 synagogues were destroyed, and publishes this information after the 2006 publication of Kristallnacht, Prelude to Destruction, has done the cardinal sin of attempting to write history without first consulting Gilbert. (Send them a copy of the book.)

In honour of this 80th anniversary, Sir Martin’s publishers HarperCollins have allowed our readers a 50% discount during the month of November.

Send the book to your children, your parents, your friends, and to anyone you know who doubts that, to quote Sir Martin, “a whole nation can be turned totally and obscenely against a decent, hard-working, creative, loyal and integral part of its own society.” 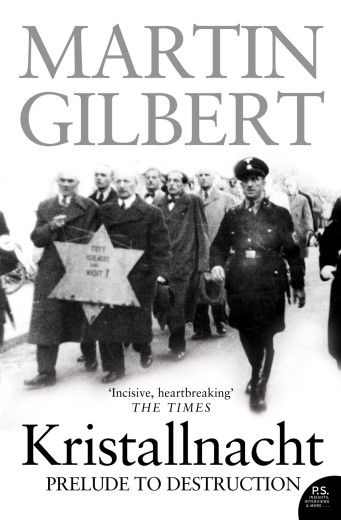 Receive a 50% discount
From HarperCollins.co.uk
For the month of November 2018
Enter code GILBERT 50 at checkout

The Tree of Life Synagogue

PostScript: In light of the Tree of Life Synagogue shooting in Pittsburgh this last Saturday morning, and coming as it does so closely to this anniversary of Kristallnacht, please allow me a further note. It does not take someone with a long memory to view the destruction of synagogues and within synagogues as an ill omen.

The United States was founded by those who craved religious freedom, the opportunity, the ability, the security to be able to pray within their communities free from harassment, free to exercise that right. This right of freedom of religion is enshrined in the First Amendment to the Constitution, the first right to be mentioned; freedom of speech comes after that. Among the early pilgrims and settlers who came to the area that became the United States was a group of Jews, eager to take advantage of this freedom, establishing a synagogue in New York, in 1654. In the wake of the Second World War and the murder of six million Jews in Europe, the United States had the largest Jewish population in the world.

Any act of violence and murder, “random” for those who happen to be caught in the gun’s sights, whether on a street, in a shopping center, in a school, in a church, in a mosque, is despicable. Yet to American Jews who have enjoyed 364 years of freedom from being murdered during their communal prayers, and to Jews around the world, this attack is very personal, and sadly very familiar.

As we gather next week to commemorate Kristallnacht, we note basic differences between 27 October 2018 and 9 November 1938: First of all, the Pittsburgh gunman did not represent the government; he was not an instrument of the government. He represents a vocal and terrifying element of our society, but one that is still not sanctioned by the majority of people. Secondly, the emergency responders were on the scene within moments, putting their own lives at risk. The paramedics, the police, the officials were present to protect life, to decry violence, to understand that the freedoms enshrined in the constitution they are employed to protect applies to all. They did not look away as their German counterparts did in 1938, they gave heart and soul. The pity is that they are called on to do this so often.

The greeting that Jews around the world say to each other on Saturday is “Shabbat Shalom”: may you have a peaceful Sabbath, may this one day of the week be one of peace and serenity, an opportunity to leave behind the workday cares and connect with something greater than ourselves. The prayers that are said in synagogues on Saturday, the world over, are based on the “Tree of Life”, a metaphor for the Torah, the Pentateuch, the history and laws of the Jewish people, the “commentary” on the Ten Commandments. The Torah is described in the Saturday morning prayers: “It is a tree of life for those who grasp it, and its supporters are praiseworthy. It’s ways are ways of pleasantness and all its paths are peace.”