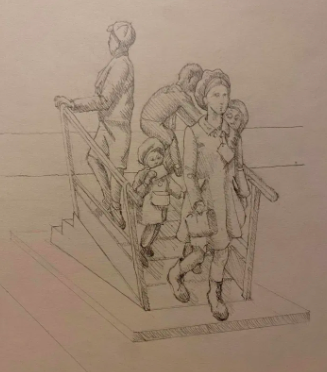 Photo: Sketch of the planned Ian Wolter memorial to the Kindertransport at Harwich.

In the ten months leading up to the outbreak of the Second World War, 10,000 children left their parents and families, their homes and countries of birth in Germany, Austria and the Bohemian and Moravian German-occupied provinces of Czechoslovakia to come to safety in Britain. Many of their stories are known – their lives before the rise of Nazism, the discrimination they faced as they were thrown out of their schools and their families terrorised, the separation from their families, their new lives in the United Kingdom, the families they built, and how they added to British society. In the main, the children were Jewish. They had boarded trains and travelled from Berlin and Hamburg to the Hook of Holland where they boarded ferries to Harwich, and then by train to Liverpool Street Station in London. Within a few years many of their families also boarded trains. But those trains took them, not to safety in the west but to the east, to their death.

Less known is the story of those who took in these traumatised children – the organisations that guaranteed their support, the individuals who made a sacrifice to bring a foreign child into their homes, their families, their lives. A memorial to those who came and to those who helped to support them is in the works. It will be located at the point when the children first touched British soil, the ancient port of Harwich.

The Kindertransport Memorial will begin with a bronze life-sized sculpture of the children disembarking in Harwich and will be installed at the quayside. Ian Wolter, who has created an award-winning sculpture to honour the Children of Calais, has been commissioned to create a sculpture showing the children leaving the ship, peering back to their homeland, and facing their new lives. Few saw any member of their families again.

The sculpture will be a focal point for guided tours, interpretation boards, exhibits at the new Harwich Museum, and will be a heritage and educational hub for schools and visitors locally and farther afield. It will offer an opportunity for young people in particular to think about what it means to be a refugee, and lesson plans will be developed for teachers to help their students grapple with the realities of the refugee, then and now.

Was Britain such a different country in the 1930s? A generation of young men had been killed in the First World War. An economic depression rocked the world. Totalitarian regimes had entrenched themselves in Germany and the Soviet Union: swift and brutal action was taken there against those who disagreed, but many were willing participants and many children – former friends and classmates of the Jewish children – had spent years being“reeducated” in the party line. Many in Britain sympathised. And yet around the country, the British shared what they had. Along with the Kindertransport children, more than 40,000 German and Austrian Jewish adults were allowed in and absorbed. They contributed to British society in innumerable ways.

The vision statement of the Harwich Kindertransport Memorial and Learning Trust brings this important history to the present: “The links between Kindertransport history and current refugee issues are a crucial part of our vision. The new resources will seek to educate young people in the crucial role played by refugees in this country and the importance of supporting efforts to help those fleeing from war, hunger and persecution to find a place of refuge in Britain. Harwich is ready once again to play its part. In the 1930s it was a gateway to freedom, now the town is ready to play its part once more.”

For more information on this exciting endeavour, please visit: https://kindertransport-memorial.org/

To donate toward this important endeavour, please visit: https://kindertransport-memorial.org/donate/