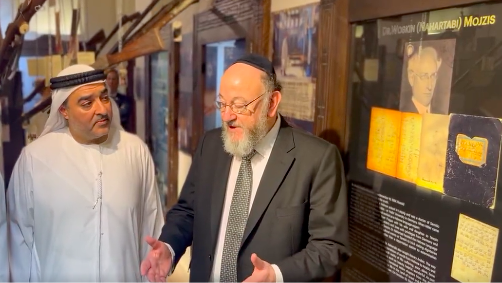 You might have missed it.  But tucked away between the struggle of the brave women of Iran to be allowed to choose how to wear their hair in public, and Qatar hosting 32 teams to the first ever World Cup in a Muslim country, was the welcome of a Jewish leader to Qatar’s neighbour Abu Dhabi, the capital of the United Arab Emirates.

One thousand Muslim scholars and leaders, imams and clerics, gathered from 70 countries for the 9th annual Abu Dhabi Forum for Peace.  Rabbi Ephraim Mirvis, Chief Rabbi of the United Hebrew Congregations of the Commonwealth, was invited to attend, becoming the first UK Chief Rabbi to make an official visit to an Arab country, and was also invited to speak.

Rabbi Mirvis began his talk with the words that both Arabs and Jews use as a greeting:  “Assalam Alaikum” in Arabic; “Shalom Aleichem” in Hebrew:  “Peace unto you”.   He spoke about their common shared ancestor Abraham and his commitment to family and community and religion.  He spoke about how the Abraham Accords had made his being there possible.  He quoted the Hebrew song which translates “Behold how good and how pleasant it is when brothers dwell in unity” but admitted:  “We must face the challenge, because where we are up to is still not good enough.  Right now, we have harmony amongst the leaders and it has to filter down to grass roots as well …. It is good and it is pleasant for brothers to sit in this hall in peace and unity, but we want this to happen amongst all Jews, amongst all Christians, amongst all Muslims, all the children of Abraham to enjoy that which is good and that which is pleasant.”

What would Martin say about this historic occasion?  He dedicated his book In Ishmael’s House on the history of Jews in Muslim lands to:  “the 13 million Jews and the 1,300 million Muslims in the world in the hope that they may renew in the Twenty-First Century the mutual tolerance, respect and partnership that marked many periods in their history.”  The visit of Rabbi Mirvis to Abu Dhabi was an important first step.

Read:  The Atlas of the Arab-Israel Conflict