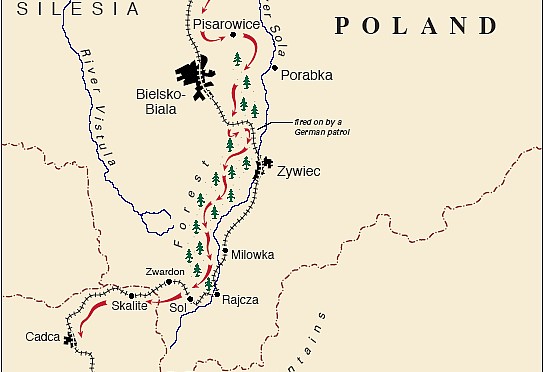 Photo:  The Vrba-Wetzler escape route from Auschwitz to Jewish leaders in Slovakia, to bring the news of the death camp to the Jews of Hungary

“I couldn’t believe my eyes,” was how Caroline Edwards described to the Congressional Committee the January 6th “war scene” she, as a Capitol police officer, “not combat trained,” found herself facing.  As the attack on the Capitol continued, those millions of us who watched in real time, could only agree – we also could not believe our eyes.  Or we, and Edwards, didn’t want to believe what was unfolding in front of us.

Jonathan Freedland, a UK journalist, has published a biography of Rudolf Vrba.  Vrba, a Slovak Jew, had been deported to Auschwitz-Birkenau in late June 1942, before the daily deportations and gassings had begun.  He and fellow Slovak Jew Alfred Wetzler escaped from Auschwitz-Birkenau nearly two years later in April 1944 with the intent to warn the remaining Jews of Europe what their destination – and their probable fate if they boarded the trains – would be.  Auschwitz was not only “the unknown destination” to which the Jews of Europe were being sent, it was an unknown destination.  “Auschwitz,” the German name for the nearby Polish town of Oswiecim, was not on any map of Europe.  The name was meaningless.  And those who went there did not return.

Rudolf Vrba was my hero long before I met him.  I had read his memoir, I Cannot Forgive.  In one of the flukes of nature, I got to know him and worked for years to have him recognised and honoured in Canada where he lived.  I was fortunate to spend time with him on several occasions.  I understood what a rare opportunity it was to stand with someone who had known the depths to which presumably civilised human beings can descend.  And Rudi was a teacher whose sense of morality was profound.

It was the 50th anniversary of Kristallnacht and I invited him to give the annual address to the Edmonton, Canada, Jewish community.  I had always wanted to meet him and I had reached the privileged position in the committee to choose the speaker.  “I’m not coming as a survivor,” he said.  “I’m coming as a lecturer, a scholar.”

The following year Rudi was invited back to Edmonton.  I went with him for a walk.  It was winter and we walked along the banks of the frozen North Saskatchewan River.  I wanted to understand what it takes, what “survival” means when there is the “iron fist beneath the antiseptic rubber glove” as Rudi describes in his memoir the Nazi control over the life and death of millions.  Rudi had been deported from his hometown to the transit camp of Novaky, and from there out of Slovakia to Majdanek near Lublin in occupied Poland.  As conditions were grim in Majdanek, Rudi was among those volunteering to leave.  Their deportation train went straight to Auschwitz.  It was about Auschwitz I was asking.  How did he survive?

Rudi told me when he got there, he said to himself:  “This is real.”  He said people who came and thought they were living in the same world they had left at home could not survive.  Basically they had no skills to cope with what was in front of them.  They “couldn’t believe their eyes”.  Rudi did.  He understood he was in a different world.  He understood that the first step in adapting is accepting reality, even if their previous reality had changed.  Even if that reality is one we cannot be prepared for, even in our wildest and most terrifying dreams.  Even if they could not believe their eyes.

It was an important lesson for me.  We don’t have the wherewithall to react if we don’t accept what is in front of us.  It happened in an instant for me, when my brilliant wonderful husband went from being healthy and active and busy to hovering between life and death.  All in a heartbeat.  For three days I told myself:  This is real.  The world of last week and even yesterday is a different world.  I had to believe my eyes and accept that the new world I was in would take all of my energy and focus and prayers just to keep going.  And we did, for nearly three years.

Millions did not have the option to survive by accepting reality and adapting – six million Jews in fact, amid millions of other “undesirables” and prisoners of war who were “exterminated”, “liquidated”.  Rudolf Vrba was a rare individual, a kind and gentle man, not open to trust, never shy to call out evil, determined and confident in what he had seen and learned, and happy to impart it in a methodical, scientific manner.  The world is stronger for his witness.  We have much to learn from him.

Read: Auschwitz and the Allies