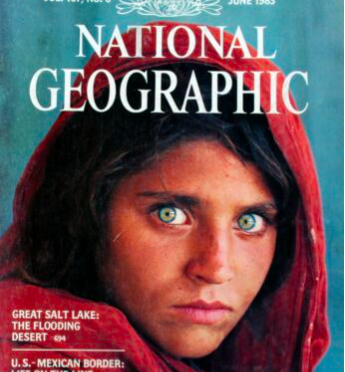 The face of then twelve-year old Sharbat Gula that adorned the cover of the June 1985 edition of National Geographic was the face of the refugee. The fear in her eyes hints at what she witnessed during her young life; it also indicates the level of trust she didn’t have for her photographer. Steve McCurry found her in a camp in Pakistan, a refugee of the Soviet occupation of her native Afghanistan. His photograph gained instant fame. It took many years before any of the benefits of it reached her. National Geographic eventually established a children’s charity fund in Afghanistan in her honour, and paid for medical treatment for her and her family. She has not had an easy life in her war-torn homeland.

September 29-30 marks the 80th anniversary of the Babi Yar massacre where, in those two days in 1941, 33,771 Jews were shot into a ravine near Kiev, one of the largest massacres among hundreds that took place in German-occupied lands that now constitute Estonia, Latvia, Lithuania, Belarus and Ukraine. The killings took place a mere ten days after the German Army reached Kiev. Until Kiev’s liberation by the Soviet Army two years later, the Babi Yar ravine continued to be the mass murder site of Roma, Communist officials, Soviet Prisoners of War, and Soviet civilians, but Jews constituted the largest number.

Memorialising the Babi Yar ravine reflects the political history of the area. During the Soviet era it was “Soviet citizens” who were killed there. It was only Yevgeny Yevtushenko’s 1961 poem Babi Yar that connected it to the murder of Jews. When Ukraine became independent thirty years later, it recognised that those killed in the main were Jews, a community that had lived in Kiev for hundreds of years, a community destroyed. How best to remember them, to memorialise it? Current plans are to build a memorial at the location, a synagogue, a museum, but not without a measure of controversy and politics.

The withdrawal of American forces from Afghanistan, the promises of the new Taliban government to honour the rights of women and girls but only “according to sharia law” leaves a lot of interpretation open as to how it will affect the young Sharbat Gulas of today, of tomorrow. Brutal regimes take control and believe their way is the only way and those who don’t conform to that way have no place in their society. For the forces of Nazi Germany, Jews were seen as dispensable though only after everything had been taken from them – their property and possessions, their food and clothing, and finally the air they breathed. In some Islamic societies women are there only to serve men and bear and raise children, the Jihadists of tomorrow.

The line in response to the Holocaust is: Never Again! Never again will we allow dictatorships to brutalise people in their midsts. Never again will we allow those who need assistance to go wanting. Each government has a responsibility to protect its citizens. This must be upheld. We must learn. But is that enough? I think not. Learning is only the beginning. We must change our behaviour, our reactions, our support and support systems.

War has raged in Afghanistan for 43 years. Now, as Afghans face a particularly vulnerable time, we must again ask ourselves what of our values have changed since 1941? As Primo Levi wrote: “A country is the more civilised the more the wisdom and efficiencies of its laws hinder a weak man from becoming too weak or a powerful one too powerful.” Levi goes on to add: “But in the lager things are different.” Will they be different for the world’s 82 million refugees who fled war and brutal regimes? Will they be different for the generations of Sharbat Gulas?

Read More:  Atlas of the Holocaust