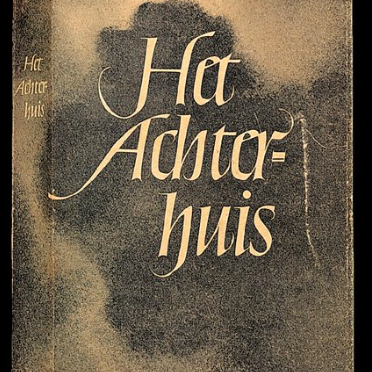 Photo:  The cover of the first edition of Anne Frank’s diary, The Secret Annexe, published in Amsterdam in 1947.  Many editions, translations, adaptations followed.

Anne Frank’s story has gone through many representations.  My favourite is this one:

The stage is set as a dwelling that has been ransacked.  Onto this stage walk a man and a young woman.  The woman opens a drawer and takes out a book and hands it to the man.  I had read the book more than thirty-five years before seeing this play.  I could barely see the stage through my tears.  I knew what had happened, and what was to follow.

The scene depicted is Miep Gies who brings Otto Frank into the annex where Otto and his wife and two daughters, plus four other Jews had been in hiding from the deportation they eventually faced.  Of the people in the annex, it was only Otto Frank who came back.  The book was the diary Otto had given to his daughter Anne for her 13th birthday.  It was to be her constant companion and confidante where she not only divulged her deepest secrets, but recorded life in hiding in Amsterdam, and gave a human voice to the millions who like her were living in fear, eventually to be captured and murdered.

Otto Frank, realising what he held – not only this opportunity to know his younger daughter and relive their experiences through her eyes, he saw Anne’s diary as a way to teach what it was like for one family, one young girl during the Holocaust.  He edited out the more personal bits and kept the diary as a way to comprehend the Holocaust from the perspective of one young girl, a gifted writer at that.  By the time I read it in the late 1960s, it had been translated into 30 languages.

Anne Frank’s diary is a way for young people to learn about the Holocaust, to see what life was like without the trauma of those who did not have a relatively safe hiding place and people, like Miep Gies, to bring them food and help when possible.  Fearful and cloistered though life was for those in the annex, it was safe.  Until it wasn’t.  Arrested they were taken to Westerbork Transit Camp and then deported to Auschwitz.  Within a few months, Anne, her sister Margot, and their mother Edith were deported to Belsen, where their strength finally gave out.  Otto Frank was liberated in Auschwitz by the Red Army.  He was the only one from those hidden in the annex to survive.

Anne Frank has become a symbol of youth and potential crushed by a totalitarian system.  Her diary has gone through many versions and incarnations, not least the play I saw in the early 1980s in Edmonton, Canada, directed by a Dutch-Canadian whose aunt had also hidden Jews.  Animated films depict Anne’s story and new editions try to outdo what Otto Frank originally intended.  One such edition has reintroduced the fantasies of a young girl going through puberty while locked in an enclosed space with a young man and his family.  A graphic book has been made along those lines and a new film has just made its appearance.

The school board for the Keller School District in Fort Worth, Texas has requested that copies of this new edition, Anne Frank’s Diary, The Graphic Adaptation, be removed from schools, along with more than thirty other books that parents have deemed unacceptable for their children.  The issue seems to be the sexual fantasies of a young teenaged girl, excerpts that her own father had originally removed from the diary.

Where and how children learn about these things is a separate issue.  By removing Anne Frank’s diary from the school district, a classic introductory book on the Holocaust, where and how will children learn about this important history?  Every generation needs to know who Anne Frank was, and why the diary she wrote is exceptional.  The issue of these book removals may be questions of control, censorship or decency.  But Holocaust history must not be the casualty.