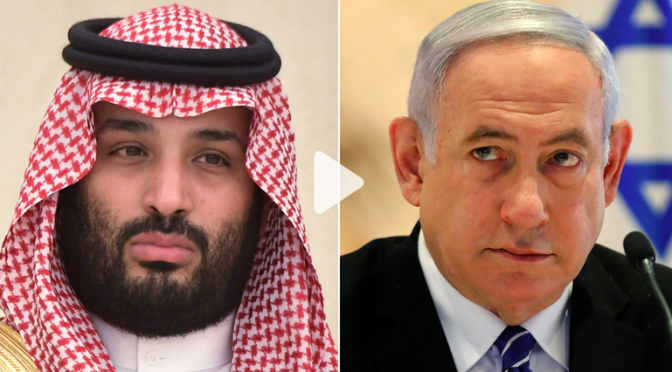 In November, Israeli Prime Minister Benjamin Netanyahu flew to Saudi Arabia and met with Saudi Crown Prince Mohammed bin Salman and U.S. Secretary of State Mike Pompeo. Although there have been low level under-the-radar communication for many years between these two Middle Eastern countries, this is the first such meeting at a high level.

Welcome news though this “normalisation” is for many who have waited decades for Israel to be recognized and accepted by her Arab neighbours, several large questions remain to be answered. Chief among them is the fate of the Palestinians in the West Bank and Gaza who have looked to the Arab world for support in their quest for statehood. Also to be settled is the fate of the Palestinian diaspora, many of whom still live in refugee camps in Lebanon, Syria and Jordan, not accepted as citizens by their host countries – true also for Palestinians living in Kuwait and Saudi Arabia. It is now 72 years and more than three generations on from the war that became the Israeli War of Independence, and like most wars, created masses of refugees on both sides of the conflict.

Muslim countries have had a long and mixed relationship with the Jews who lived there, depending on the temperament of the ruler at the time (see Martin’s In Ishmael’s House). The relationship between Arab and Jewish communities in Muslim countries deteriorated when, during the Second World War, Nazi Germany courted the Arab countries, flooding them with anti-semitic rhetoric. The fact that Arabs did not fit the definition of the Nazi German “Aryan” Master Race seemed less of a concern. With the establishment of the State of Israel in 1948, many Jews were forced out of their homes in Arab lands, countries in which they had lived for centuries; many found their way to Israel where they have become an integral part of Israeli society. That anti-Jewish and anti-Israel propaganda, still very much alive and flourishing today in many Arab countries, must be countered if relations are truly to be “normal” between neighbours.

Normalisation and the settling of the Palestinian people’s aspirations will also be enhanced by the acceptance of Israel among those political groups in the West who declare their support for the Palestinians at the cost of the Israelis. One wonders whether the support results in anything concrete for the lives of Palestinians. Protests have their place, but providing help with education and nation-building might be more beneficial to those who need the help, than posters and slogans and boycotts. With some Arab states beginning to recognise Israel, it offers an opportunity for those in the West to work toward making these new relationships solid, viable and future-oriented.

By working with willing partners, there can be room for everyone to live and raise their children in peace. The recent efforts made by the United Arab Emirates, Bahrain and Sudan to recognise Israel, joining Egypt and Jordan, and by the Saudis to open talks could be welcome news in a year that has seen so much death and destruction in the world wreaked by one microscopic virus. If new friendships can be further cemented and built upon, it sets an example of how neighbours with vast differences but with even more similarities can find a way to live amicably.

Martin updated his Arab-Israel Conflict Atlas every few years. I kept asking him when the final edition would come out, when the “Conflict” part would be ancient history. He believed it would come. He used to say that France and Germany fought three terrible wars and now you don’t need a passport to cross the border – you don’t even know when you’ve crossed the border. It will happen in the Middle East as well, he believed. Now we may be getting one step closer. Baby steps. Martin would be pleased.

For a fascinating and informative in-depth discussion on the history of the Arab-Israeli peace initiatives of the last forty-five years, please click on Seth Anziska’s talk on:

“Israel and the Palestinian Question in the 21st Century”