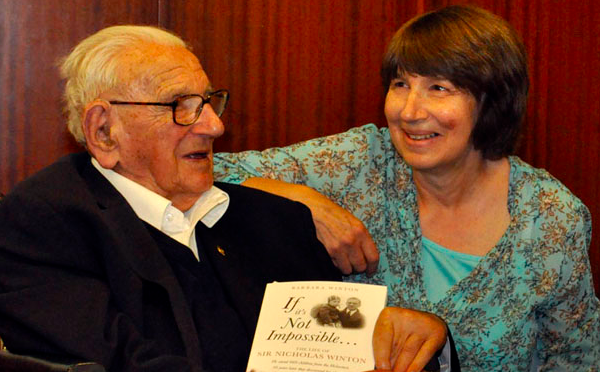 Photo:  Barbara Winton with her father, Sir Nicholas Winton, and her book.

“Do you want to meet Nicholas Winton?”  Not an offer people get every day, even an offer made to Martin Gilbert’s groupie and wife.

It was 2005, Martin was writing his book on Kristallnacht and wanted to speak with “Nicky” about it.  Winton had been instrumental, in 1938 and 1939, in helping the Children’s Section of the British Committee for Refugees from Czechoslovakia rescue children from impending doom in Prague.  Winton ran the London office.  Six hundred and sixty-nine children came to Britain through his efforts and those of the Refugee Committee in Prague.  In 2003 he was knighted for his services to humanity regarding the Czech Kindertransport.

Martin and I met Nicky and his daughter Barbara at his home and spent a few pleasant hours with them.  Barbara’s interest in her father’s story prompted Martin to encourage her to write a book about it.  She did:  If it’s Not Impossible, the Life of Sir Nicholas Winton.

When Martin became ill Barbara visited him and she and I became close.  Whenever Barbara was in London we would get together.  She invited me to come for a break and spend time with her and her family outside London, an offer sadly I never took her up on though I was deeply touched.  About 5 months after Martin died in 2015, Nicky died at the great age of 106.

In 2019, I was invited to an event at the National Holocaust Centre to mark its anniversary.  Barbara was there and she and I walked in their beautiful rose garden (a memorial dedicated to those murdered in the Holocaust).  She was organising Nicky’s archive and she knew I had done similarly with Martin’s.  She had been battling a disease for some time and though it did not look good, she was strong and as beautiful as ever.  If not for the onset of Covid and the lockdown and my subsequent move to Canada, we would have seen more of each other.

On September 20th Barbara succumbed to the disease.  She will be sorely missed.  By her writing and speaking she became the conduit for her father’s story.  Thousands of people – children, grandchildren, great-grandchildren owe their lives to Nicholas Winton.  He never spoke about it and only recently acknowledged what he had done.  If not for Barbara, few others would have known.  She helped to make her father’s efforts part of History and to raise awareness of the rescue of refugees, a dire situation that the world still faces.

Barbara was, as the Jewish prayer describes, an Eshet Chayil, a woman of valour.  She is missed.