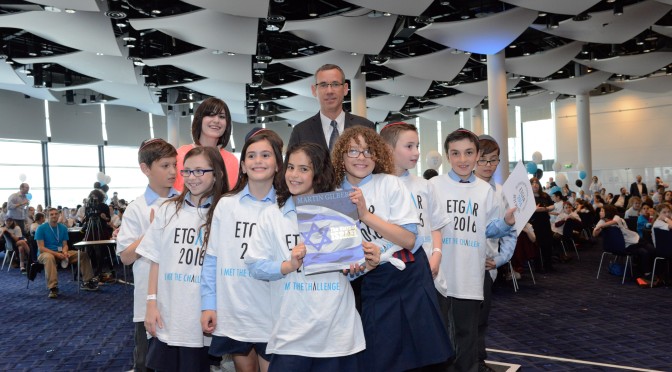 Over 800 children from 25 schools took part in this year’s Etgar Challenge at Wembley Stadium. With a team of over 100 volunteers, it was an unforgettable afternoon filled with singing, puzzles, challenges and games. Etgar, whose name is Hebrew for “challenge” and whose mission is to inspire a love of Jewish learning, is open to pupils in Year 5 (age 9-10) from participating Jewish schools.

At the start of each academic year, each child receives a copy of the Etgar Handbook, a jam-packed guide to Jewish history, the Jewish calendar, Tanach (Bible), the Talmud, Israel, Shabbat and ethics. Supported by weekly Etgar challenges, the children work throughout the year to develop their knowledge.

The Etgar Challenge is the biggest Jewish General Knowledge quiz in the world. Children from schools across the country competed for the Etgar trophy which tested their Jewish knowledge and celebrated a whole year of learning. The winners of the creative rounds were chosen by a group of judges, including Lady Esther Gilbert and Rabbi Dweck. The winning teams were presented with their awards by the Chief Rabbi and the Israeli Ambassador.

Prizes were given to the top 3 performing teams, best overall school and best rap and poster. The prize for the best poster went to Broughton Jewish Primary School. Each member of the team was presented with Sir Martin Gilbert’s Story of Israel by His Excellency Mark Regev, the Israeli Ambassador.

Etgar is now in its fourth year and has grown from 200 children to over 800 in the UK alone. Etgar is also running in South Africa, Canada, Australia and Hungary. “This is Anglo Jewry at its best”, commented Rabbi Rafi Zarum, Dean of London School of Jewish Studies.

The quiz concluded with all 800 children on their feet, singing and dancing together, lead by Rabbi Marc Levene and a host of madrichim (youth counsellors).