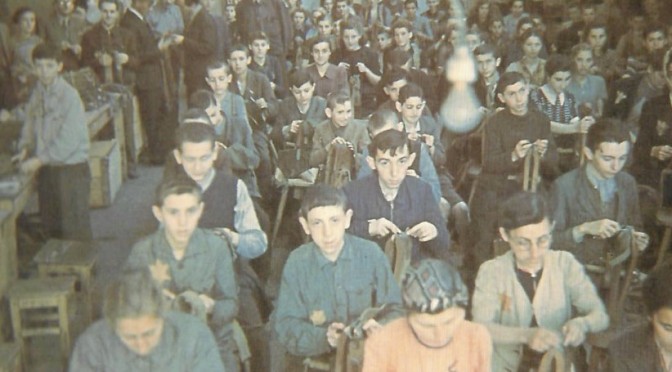 Photo: Jewish youngsters in the Lodz ghetto producing leather goods in one of the German-run factories. This colour photograph was taken by a German official in the ghetto. From Martin’s book Never Again

Back in 2019 BC (Before Covid-19), I used to wonder whether Holocaust education had reached its sell-by-date: it’s so old; anyone born in the last century is already old; it happened even before the Internet. War has continued. Genocide which owes its name to the slaughter of Jews during the Second World War, has continued. Famine, disease and displacement as a result of war has continued. What does “Never Again” mean if we “remember” but do not change our behaviour? Is learning about the Holocaust relevant? Has Holocaust education taught us anything or is it too foreign a concept, too last century?

I began my January newsletter asking whether the year 2020 would be a year of vision. Little did I know we would be looking at the year and our lives and our world with completely new eyes! Today we are living a moment of history as the creep of coronavirus encroaches upon our lives and our families, on our livelihoods and our way of life, and even on our planet in ways we could never have imagined only a few months ago. Day by day the body count rises; day by day the stock markets fall; day by day uncertainty grows. Parents are worried about their jobs, children are worried about their schooling, and in families where there was strife before, tension escalates.

But is it all doom and gloom?. In my little corner of North London, the spring weather has been glorious, trees have sprung their leaves, flowers abound, the birds are singing and for about the first time, we can hear them. The skies are clear and even stars have been visible at night. Families have time together they may have never had before, we are baking and cooking and chatting with neighbours (from a safe distance), walkers are even smiling and saying hello. The homeless and those living on the street have been moved into empty hotel rooms and are having the opportunity to rethink their lives. What is happening here is happening elsewhere.

In the space of four months the world has changed. Will we be able to manage financially? Will we indeed be safe in our own homes as disaster stalks our streets? Will our children still be able to be educated? How can we even mourn our lost family and friends when funerals and community mourning rituals are not allowed? Are our leaders making the best decisions? When will it all end? Will we be able to weather this, medically, financially, psychologically, socially, communally?

In living this moment of world history, we may have a slight insight into how quickly things can zoom from “normal” to “unprecedented”. We see our leaders struggle to cope, struggle to lead when the way forward is not clear and the present so shaky. Yet although the times are unprecedented, these questions are not original.

In pre-war Germany, Jewish property was confiscated or destroyed. Those who made the decision and were able to leave could take little more than their families and their wits. Many stayed in Germany, thinking it would blow over, even as they were thrown out of their jobs and their children were thrown out of school. Two years later, mass starvation followed the German decision to put occupied Poland’s Jews into lockdown in ghettos; the dead were buried in mass graves by those who themselves weren’t far from death. Three years later, in Hungary, the time it took for hundreds of thousands of Jews living comfortably in their homes to finding themselves behind the gates of Auschwitz, was mere months.

Leaders of the German-established Ghetto Jewish Councils, hampered by inadequate food, medicine and heating fuel procurements, tried desperately to save their people. Chaim Rumkowski, head of the Jewish Council in the industrial city of Lodz, set up workshops to produce materials thought to be vital to the German war effort, thereby making workers essential and saving their lives. When the Germans demanded a reduction in the numbers of Jews in the ghetto, demanded thousands to be assembled for deportation, Rumkowski addressed his people. He asked them to give up their children, their sick, their elderly: “I simply must cut off the limbs in order to save the body. I have to take away children, because otherwise others will be taken. … Deliver to me those sick ones, and it may be possible to save the healthy ones.” Rumkowski, along with every other Jewish Council head under German occupation, was faced with an untenable, inhuman decision. Adam Czerniakow in Warsaw wrote to his wife, “The SS want me to kill children with my own hands.” He committed suicide rather than surrender his people. Rudolf Kasztner in Budapest bargained with the Germans in order to save a few Jews. None of them knew what means would save the greatest number of lives.

In a Times article on April 20, Matt Chorley writes that our leaders face the choice between the harm to the economy imposed by the lockdown, and the potential increased loss of life in relaxing the lockdown. He writes that our leaders must “choose between deaths now or deaths later.” It is a choice that was familiar to Jewish leaders during the Holocaust. Although the circumstances are very different, Coronavirus is giving us an opportunity to see how history unfolds, moment by moment. We see how leaders make decisions based on what they know at the moment, as we and they are living that moment. We see how, in examining history, the only way to understand it, to view it, must be within the context in which it happened.

It was Jewish theology that described human life made in the image of God; nearly every Jewish law can be broken in order to save a life. Human beings are resourceful and resilient; economies will rebound. How we look back on 2020 and the decisions our leaders took, it must be the saving of human life that takes precedence. This is expressed profoundly by Naomi Sandweiss, in an article in the online journal Tablet, published on the centenary of the Spanish flu epidemic in 1918. Sandweiss writes of Rabbi Moise Bergman who supported the decision to increase the quarantine of the people of Albuquerque, New Mexico. He wrote, in the Albuquerque Journal, on 26 November 1918: “It is hard to answer the man who says his business has been hurt by the quarantine but it will be impossible to answer the one who says my child has died because of the neglect of the state.”

Whatever our leaders and our neighbours in lockdown decide, the value of human life must outweigh other considerations. Those who remember the Holocaust have already come to that conclusion.