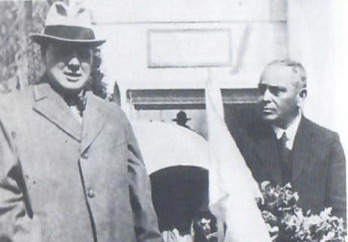 Photo: Churchill in Tel Aviv with the city’s mayor, Meir Dizengoff, March 1921; Central Zionist Archives, from Churchill and the Jews

This year marks the centenary of Winston’s Churchill’s visit, as Colonial Secretary, to the Middle East, which included an eight-day visit to British Mandate Palestine. Martin loved to tell the story of how the Jewish residents of Rishon le-Zion discussed how they should greet the visit of this British dignitary.

Martin knew Churchill had made this visit to Rishon in 1921, and during one of Martin’s trips to Israel, he paid a visit to the town’s municipal office. He asked to see their archives which surprised the officials as no one had asked to see their archives in decades, if ever. They managed to locate a stack of papers and Martin found the preparations for Churchill’s visit.

In the minutes of the town’s meeting prior to the visit, the discussion revolved around what to tell the Colonial Secretary, how to present their situation. Some, the older people, wanted to tell Mr Churchill how difficult their lives were,: the terrain was hard to cultivate, they lived in fear of Arab attacks, sheer survival was a struggle. Mr Churchill should be aware of what they faced.

The younger people felt otherwise. And in the end, they won out. They dressed in their finest clothes. They met the Colonial Minister on horseback and accompanied him into the town where the town’s children had gathered to greet him. He was presented with a letter thanking him for his support and inviting him to share in their successes: they showed him what they had accomplished in their twenty to thirty years there, the crops, the vineyards, their orange groves.

It confirmed what Churchill had said the day before in Jerusalem:    “It is manifestly right that the Jews, who are scattered all over the world, should have a national centre and a National Home, where some of them may be reunited. And where else could that be but in this land of Palestine, with which for more than 3,000 years they have been intimately and profoundly associated.”

The visit, and the time in Rishon in particular, made a deep impression on Churchill. On his return to Britain, he reminded the House of Commons how beneficial their own role had been with the Mandate: “I defy anybody, after seeing work of this kind, achieved by so much labour, effort and skill, to say that the British Government, having taken up the position it has, could cast it all aside and leave it to be rudely and brutally overturned by the incursion of a fanatical attack by the Arab population from outside. … It would be disgraceful if we allowed anything of the kind to take place. I am talking of what I saw with my own eyes. All round the Jewish colony, the Arab houses were tiled instead of being built of mud, so that the culture from this centre has spread out into the surrounding district.”

In his book Churchill and the Jews, Martin writes of this trip and the impact his visit had made on Churchill: “In that short time he had been struck by the enthusiasm of the Jews and the intensity of Arab hostility against them.”