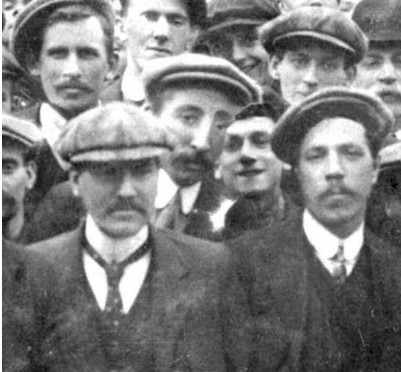 Photo: Leaders in the strike, including John Hopla who with Will John formed the Cambrian joint-strike committee. WalesOnLine.

The recent mailbag included inquiries from two journalists who wrote to ask Martin to comment on a remark by the Shadow Chancellor. John McDonnell claimed that Churchill, while Home Secretary in 1910, was a “villain” in his handling of the Tonypandy riots in Wales. Churchill had sent policemen instead of soldiers to contain the strike that developed into a riot. Martin writes, in Churchill, A Life, (a quote sent to both journalists):

On November 25, in the Commons, Churchill defended his action in withholding troops.  “It must be an object of public policy,” he declared, “to avoid collisions between troops and people engaged in industrial disputes.”  The Conservatives accepted this argument; the Liberals welcomed the statement of principle.  But, for the Labour Party, Keir Hardie protested against the “impropriety” of sending the troops at all and the “harsh methods” of the police.  It was this charge, not the original Conservative criticism of lack of ruthlessness, which created the Labour myth that Churchill had been, not the conciliator withholding troops and offering arbitration, but the belligerent sending troops and seeking confrontation.  For Liberals, Tonypandy represented the success of moderation.  For Labour it became part of a myth of Churchill’s aggressiveness.