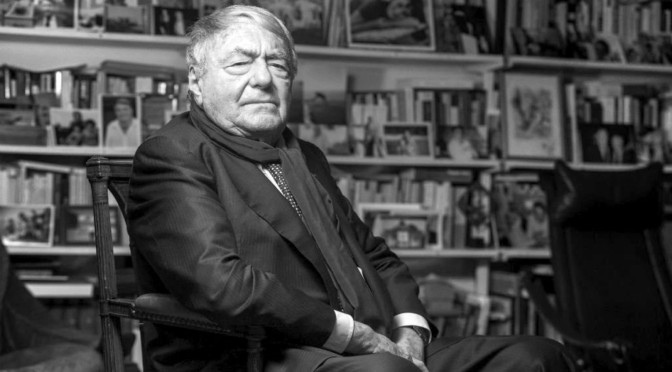 Photo: Claude Lanzmann in his study

I never met Claude Lanzmann, and I am ashamed to admit that I never watched the whole of his 9 ½ hour film Shoah. I did however have correspondence with him and through the impetus for that, and his film, I came to meet Martin.

Lanzmann’s landmark film came out in 1985. Eventually it was broadcast on television in Canada and the late Dr David Schiff, knowing I was interested in the Holocaust and involved in Holocaust remembrance, gave me a copy of the broadcast that he had taped on VHS. I kept the tapes, meaning to watch them, but I had young children and a business to run and I don’t do visuals as easily as reading. So the tapes sat in a box untouched.

In 1988 I was involved with the “Generation After Committee” of the Jewish Federation of Edmonton, Alberta. The community’s annual commemoration of Kristallnacht was with a speaker, and that year it was the 50th anniversary. I had heard that Rudolf Vrba, one of my heroes as I had read his memoir I Cannot Forgive years before, was living in Vancouver. I invited him to be our speaker.

Rudi was a controversial figure, and I had the sense that others may not have been as keen as I was to hear him. So I pulled out the box of VHS tapes of Shoah and found the parts where Vrba speaks. Needless to say, it did not take me more than a few moments to realise that he was a real authority and I would stand behind my choice. Rudi speaks with scientific precision, and with such clarity and conviction – as well he should. He had survived two years in Birkenau when he and fellow prisoner Alfred Wetzler escaped, in April 1944, with the first news to reach the outside world that Auschwitz was a death camp. The escape of Vrba and Wetzler was followed the next month by that of Czeslaw Mordowicz and Arnost Rosin whose report confirmed what Vrba and Wetzler had said. Together their testimony became known as the “Auschwitz Protocols” or the “Auschwitz Report”.

That Kristallnacht talk was also the beginning of an extraordinary friendship. It became a dream of mine that Rudolf Vrba should be honoured by his adopted country, Canada, and I began a campaign to do just that. I wrote to anyone who knew or had written about him. I wrote to Claude Lanzmann for his support – which he willingly gave.

Oh, and I also wrote to Martin Gilbert.

When I had asked Rudi for biographical information, as I was going to be introducing him at the talk, he responded: “Martin Gilbert. Auschwitz and the Allies.” In researching this book, Martin had extensive correspondence with Rudi to be clear in his mind the circumstances and events that brought the news of Auschwitz to the outside world and what the consequences of that report were.

My campaign to honour Rudi was unsuccessful. But he has left his own legacy in the books and articles he has written (an updated edition of his memoir, entitled I Escaped from Auschwitz will be coming out in the autumn), in the interviews he gave, and in the annual August march done in his memory along the escape route he and Wetzler took from Auschwitz to Slovakia. Claude Lanzmann has left his important legacy, not least in the interviews he filmed and the miles of footage he kept. And you, reading this, are helping to continue Martin’s.

Auschwitz and the Allies