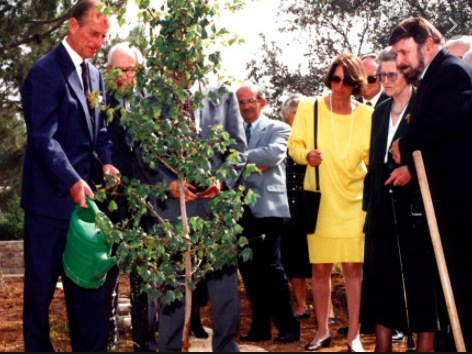 Photo: Prince Philip planting a tree at Yad Vashem, Israel’s Holocaust Memorial, in 1994 to honour his mother Princess Alice of Greece who saved a Jewish family.

In his talks about “Righteous” individuals who helped their fellow human beings, Martin has spoken about Prince Philip, the Duke of Edinburgh, who as a schoolboy in Salem, Germany in 1933 helped a Jewish “senior boy” who had been harassed and tortured by other boys acting on the anti-Semitism that pervaded Germany then. The boy had been overpowered and had his hair cut off. Prince Philip, who had come there from an English school, still had his cricket cap which he gave to the Jewish boy who wore it until his hair grew back. It was an act of compassion and decency.

Among the tributes published after Prince Philip died last month was his speech at Yad Vashem in Israel in 1994 when he mentioned this incident. He had been invited to Israel on the occasion of his late mother, Princess Alice of Greece, being honoured for being a “Righteous Among the Nations”. Princess Alice had hidden a Jewish family, the Cohens, in her apartment in Athens in October 1943 for 14 months, saving them from deportation to Auschwitz.

In his speech at Yad Vashem, Prince Philip recalled this incident from his youth, the Jewish boy’s helplessness in the face of hatred, and the impact it had on him: “It is a small and insignificant incident, but it taught me a very important lesson about man’s capacity for inhumanity, and I have never forgotten it. We may dislike individual people, we may disagree with their politics and opinions, but that should never allow us to condemn their whole community simply because of the race or religion of its members.”

In the same week of Prince Philip’s very moving and powerful funeral service came, from across the water, the trial and conviction of Derek Chauvin for the death of George Floyd by asphyxiation a year ago. It was a landmark case in that a young girl at the scene, Darnella Frazier found the wherewithal to film the incident on her phone. It was her documentary evidence that clearly showed a man dying at the hands of the police, a black man, a white policeman, a tragedy for all. Darnella Frazier’s film galvanised a nation and a world, teaching us all, in Prince Philip’s words that “man’s capacity for inhumanity” when faced with someone different can and does lead to death.

Hatred against people who have different skin colour or features, different accents or backgrounds, different religions, different views has one thing in common – it is taught; it is learned. The young German schoolboys who overpowered Prince Philip’s Jewish “senior boy” may well have been the same ones who, ten years later as part of the German occupying forces, knocked on Princess Alice’s door in Athens looking to send the Cohen family to their deaths. The prejudice, the hatred they had been taught as children to attack a fellow student resulted in the murder across Europe of millions.

It is not only in the legal and political and institutional realms where hatred and racism will be solved. It is in the individuals – Prince Philip making a symbolic and real gesture, his mother Princess Alice making an effort to protect others, and Darnella Frazier documenting a hate crime taking place – where change can happen. Compassion, understanding, empathy, decency. No one is perfect. But we can all be better. In this also, “no one is safe until everyone is safe”.