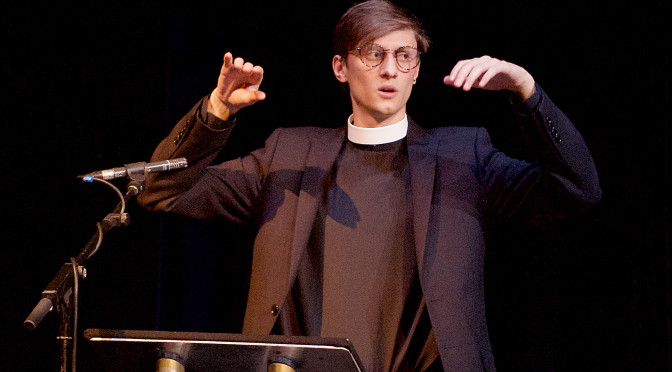 Sadler’s Wells hosts an opera/ballet by Leo Geyer on 4th July 2016, inspired by his visit to Auschwitz with exhibition and reception.

Auschwitz is a disturbing, silent place, even now. When British composer Leo Geyer arrived there to research his latest piece, he was struck by the way that the archivists hummed to themselves. “I imagine they are trying to escape from the silence”. He was there to discover as much as he could about the orchestras of Auschwitz, the musicians forced to play as prisoners were herded to their deaths. It was not a familiar story to him. Born in south London, Geyer, 24, is not Jewish and felt little connection to the Holocaust.

“Until now, the Holocaust has been hidden under a rock in my head. I had not even heard of the orchestras of Auschwitz, and had escaped any images of horror as their playing accompanied other prisoners to their deaths”.

All that has changed since Geyer started work on an opera/ballet which will revolve around the Sunday concerts given by the camp’s orchestra and vocal soloists. As well as music written in Auschwitz, the score will include an original composition in memory of Sir Martin Gilbert, renowned Holocaust historian.

The idea came from Anna Whyatt, an old friend of Sir Martin and his wife Esther. She works with Constella, an orchestra that Geyer set up when studying music and composition in Manchester.

He gained two first-class degrees and subsequently has developed Constella into the UK’s first company devoted to a fusion of opera and ballet, he also works as a conductor for the Royal Ballet.

Geyer explains: “Anna and I had the idea that I might write a piece in honour of Sir Martin for the opening of the Sir Martin Gilbert History Centre which will be housed in the new Highgate Synagogue.

“Lady Gilbert was very keen on the idea, and I planned an initial exploratory trip to Auschwitz to take a look at some manuscripts”.

“I wanted to immerse myself in the atmosphere of Auschwitz,” he recounts.

“I met with archivists, in the very room where the orchestras rehearsed, and pored over many of the surviving manuscripts, of which there are 210.

“But this is a fraction of the original documentation, as I learnt that ninety percent of the scores had been destroyed by the prisoners themselves. “What struck me most there was the harrowing silence, not even birdsong.”

A second trip enabled him to delve deeper into the archives. “I was amazed to discover compositions that were surprisingly upbeat, such as the Arbeit Schlager march which was almost joyful, with barely a minor chord.

“I also found partial manuscripts of famous composers such as Beethoven, that the prisoners had written down from memory.

“It is said that the orchestras were hated by the other prisoners for their playing and writing of lively music – music that was written for concerts performed on Sundays, weddings and camp openings, for SS officers and prisoners alike”.

On his last trip, Leo found the inspiration for his composition, “As I left Auschwitz for the last time, I heard the sound of a lone blackbird, trying to sing yet managing only a stuttering tune. It was a call into the emptiness that received no response, a call to remember, to never forget.”

The performance begins with a recording of the blackbird faltering over his song. A reader recites a poem by Leo describing how the bird cannot compete with the deafening silence of Auschwitz.

Offstage, a trio of cello, clarinet and violin plays the re-imagined section of a piece of music by an unknown prisoner. Finally, the reader and blackbird sing in unison in mournful tones. There is a sense of tension and darkness, sorrow and loss of hope.

A selected audience heard the new piece last month at a concert at Sadler’s Wells, and there will be a concert at the new Highgate Synagogue, currently being rebuilt, when it is opened next April. The opera ballet will be performed a year later.

Lady Gilbert has been an enthusiastic backer of the project ever since it was suggested to her. “I was quite moved that non-Jews would be interested in the musicians and music played at Auschwitz, and felt compelled to want to honour Sir Martin Gilbert in this way,” she recalls

She is very impressed by Geyer’s talent and commitment and feels the composition is a suitable memorial for her late husband.

“Leo’s composition is a tribute to a historian who was among the very first to weave the voices of the individual, that of survivors and those who were eye-witnesses, into his history, a tribute to the work of a great scholar and a continuation of his legacy.”