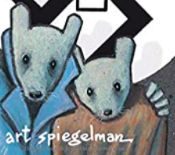 Photo:  Vladek and Anya Spiegelman as depicted by their son Art, from the cover of his book Maus

An American school district has banned the use of the graphic memoir Maus in schools because it shows nudity.  Maus is the story of Vladek Spiegelman and his wife Anya who endured every imaginable horror (and many beyond imagination) for five years, as told to and through the pen of their son Art.  We think of survivors who visit classrooms who quietly describe their experiences and their loss.  There were also survivors whose lives were profoundly and irreparably damaged by their experiences and their loss.  Anya was one like that.  She committed suicide.  In her bathtub.  Of all the horror described in Maus, we witness again loss, this time by her son, whose pen and ink drawing of his mother in the bath brings the reach of the Holocaust to a new dimension, and to the next generation.  That is the context of this “nudity”.  It’s not pornographic.  It’s a son mourning his mother, unable to offer her the hope of a future as she was so mired in the past.

Whoopi Goldberg got in trouble for saying that the Holocaust was not about race because it was between white people.  She’s right in the concept.  But words change their meaning depending on their use and the times.  We tend now to think about race as skin colour.  The Nazis viewed race as hair colour, eye colour, the length of the nose, and something they called “blood”.  (Antony Beevor tells of a German prisoner of war who refused a blood transfusion when he was told the donor was Jewish.)  That was the context of “race” 80 years ago in Nazi Germany.  Ms Goldberg didn’t understand the context.  Instead of being censured, someone might have used it and her position to educate people.  Hatred is a chameleon whose colours change with the background.  The context of how the Nazis defined race seems to have been sadly missing in her education.

A protester in Ottawa during the truckers’ protest said:  They are like Hitler and we are the Jews.  Somehow I don’t think having to wear a mask to go into an establishment of one’s own choosing is the same as being taken out into the woods and being shot, having watched your children die of starvation and your parents of disease because someone was controlling the supply of food and medicines with an enforced programme of death by one means or another.  That is the context of “Hitler” and the “Jews”.  I think it is just that people do not know.  Ignorance can lead to cult-like attractions, and connections.  Reality based on the facts might break through that.

Education it seems, is evolving into a discussion of what is “contested”, mistaken or wrong, or “contentious”, controversial.  It is a dangerous evolution where blame trumps knowledge.  It’s the easy way out, blame.  It means we don’t have to identify, try to understand who and what and why and how.  Because it is someone else’s fault.  Which brings us to my third “con”, after contested and contentious:  That is context.  What was going on at the time?  What influenced society?  What events and people were involved?  And there is always evidence for that.  Not conjecture.

Parents want to protect their children from the evils of the world – this is the parents’ job.  But is shielding them the answer?  Or is it in giving children the tools to be able to make their own moral judgements about their lives and their world?  And how to achieve that?  Through education, through history and social interaction based on fact and evidence and the voice of the eyewitness.  Give children the tools, not avoidance or cotton wool blankets to keep them safe.  The reality is we can’t keep them safe.  What we can do is arm them with knowledge, with understanding that there is always a back story, that context is important.  That we have raised them to be respectful of others and comfortable with themselves.

History isn’t black and white (sorry Whoopi).  It’s nuanced, it’s deep and multifaceted.  It can be enlightening.  Again I come back to this sentiment from Martin:

It would be wrong to judge a historical figure solely by the standards of the present day. Every generation has its own morality. The historian is not primarily a judge who drags people from out of their environment and places them before a contemporary tribunal. His first aim is to see whether the people he studies acted for the good of their own society, as they envisaged that good. His second aim is to ask whether the ideas which he is examining are valid in terms of present values.

Read: The Atlas of the Holocaust