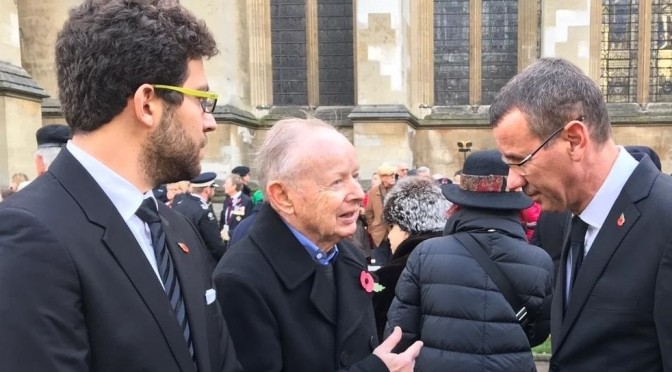 PHOTO: Israeli Ambassador Mark Regev (on the right) speaks to Lavi Melman (on the left) and Roy Van-Gelder (centre), both of whom are related to Jewish Brigade soldiers who were killed in North Italy in 1945, at the Westminster Field of Remembrance, 8 November 2018.

In response to a piece by Richard Verber of the United Synagogue on their website regarding the number of synagogues destroyed during Kristallnacht:  “We welcome reader feedback and I want to share something I received from Lady Esther Gilbert, the wife of the late, great Sir Martin Gilbert, who was in touch to point out Sir Martin’s extraordinary research which shows that the often-quoted figure of 267 synagogues destroyed on Kristallnacht is wildly inaccurate. In fact, all shuls in Germany were attacked, totalling well over 1,000. The article is well worth a read.”

Correction from Yael Driver on my Jewish Brigade at Westminster Field of Remembrance piece who writes that she is “the daughter of the late Gen. Shlomo Shamir at the time the commander of the Jewish Brigade on behalf of the Jewish institutions in Palestine.”  She further explained “The formal British Commander was Brig. Benjamin and that the two positions should not be confused.”  Corrections on the website now made – thanks Yael.