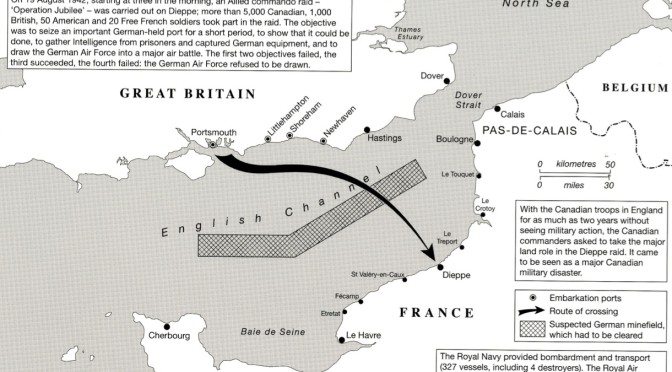 As the thousands of Warsaw’s Jews were being deported to their deaths in Treblinka in the summer of 1942, 1700 kilometers to the West, the Allies were desperate to establish a toe-hold in Europe and take pressure off German-occupied Russia on the Eastern Front. Operation Jubilee was launched on 19 August with the aim to land a mainly Canadian contingent in France, at Dieppe.

As Sir Martin’s two maps of the Dieppe Raid show, it did not go to plan, and proved to be a disaster for the Canadians. But the lessons learned helped to make the D-Day landings two years later more successful.

This year, to commemorate the 75th Anniversary of the Raid, a new granite memorial will be unveiled in Dieppe on August 19. Designed by Canadian artist Richard Hessler, a former member of the Regiment, it honours the King’s Own Calgary Regiment with an engraving of one of the twenty-three tanks from the Regiment that took part in the Raid. 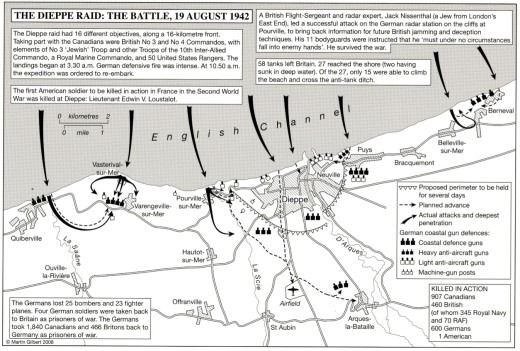 In a statement released by the Honourable Kent Hehr, Minister of Veterans Affairs and Associate Minister of National Defence, who will be attending the commemoration on August 19, Minister Hehr wrote:

“In marking the 75th anniversary of the Dieppe Raid, we remember the sacrifices and bravery shown by Canadian men and women in uniform throughout the Second World War. We recognize their courage and loss as we pay tribute and honour those who served Canada, at home and abroad, when our country needed them. During this solemn anniversary, we also take time to help tell the stories of Canadians at Dieppe and ensure that their efforts and experiences are shared and never forgotten by future generations.”

Along with the ceremonies in France, commemorations will be held in Montreal, Ottawa, and Calgary to honour those who travelled so far and represented their country with such distinction.