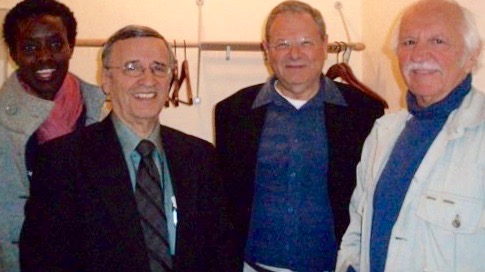 In 2009, Martin and I were privileged to be part of a film crew that traversed Europe by train visiting places where Righteous Diplomats had issued visas and had helped Jews escape before and in some cases during the war. Along with us were former refugees who had been saved, along with some of the descendants of the diplomats. The film, The Rescuers, Heroes of the Holocaust, was directed by Michael King and produced by Joyce Mandell. It featured Stephanie Nyombayire, an anti-genocide activist and child of Rwandan survivors of the genocide there, who was keen to understand why some people chose to help their fellow human beings.

One place that had particular poignancy for me was our visit to Copenhagen. The story of the Danish Jews was one that had always given me such hope: a country mobilised to help their fellow citizens and to save a community in their midst from destruction. We were met at Copenhagen’s Central Train Station by Leo Goldberger and were soon joined by his brother Gus. It was their father, the cantor in the main synagogue who had announced to his congregation on the eve of the Jewish New Year in 1943, “Lech Lecha”, “Go forth”. These words are the beginning of the section of the Torah which describes how God says to Abraham, “Go forth from your homeland to the land that I will show you.” It was with these words that the Jews of Copenhagen and of Denmark prepared to steal away to the seaside where they were met by Danish fisherman, hidden in their fishing boats, and taken across the Danish Straits to Sweden. Among them were young Leo and his brother Gus, their sister and their parents.

One revelation for me in the Denmark story is that it was a German Nazi Party member and diplomat, Georg Ferdinand Duckwitz who had discussed with Sweden a plan to take in the Danish Jews, and then alerted Danish government leaders of the planned round-up. Because of his actions, the Danes were able to save their Jewish community.