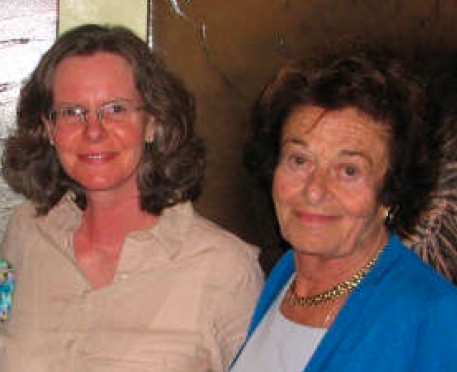 “Shaking my head, I stared at this man who was to me the embodiment of all heroism and liberty. He greeted me. I must tell him from the start, I resolved, so that he has no illusions about us. . . .  ‘We are Jews,’ I said in a small voice. ‘So am I,’ he answered.”

Days before her 21st birthday, Gerda Weismann and a group of Jewish girls were sheltering and liberated in a factory in Volary, Czechoslovakia.  Two thousand girls had been on a death march for more than three months; 120 survived to liberation.  It was Kurt Klein who had come as a German Jewish refugee to the United States before the war, had enlisted, and was a member of the Fifth US Infantry Division, who spoke to Gerda.

Learning that she was the only survivor of her family, Gerda decided to follow Kurt to the United States.  They were married and raised a family in Buffalo, New York, then moving to the Phoenix, Arizona area.  Within three years of her liberation, Gerda began speaking publicly about her Holocaust experiences, which she continued to do throughout her lifetime.  She wrote books of her experiences, she wrote for young children to help them understand differences in people, she worked tirelessly to eradicate hunger, which she had known too well.  And she was recognised for her advocacy.  In 2006 she addressed the United Nations at the first International Holocaust Remembrance Day, and in 2011 she was awarded the American Presidential Medal of Freedom by President Obama, among numerous honours and awards.

In 2002 I included Gerda’s memoir All But My Life in my Holocaust Memoir Digest.  When I completed each digest, I sent it to the author for permission to include what I had done in my book.  Gerda wrote back to me that Kurt had died, suddenly, and she was bereft (in ways I can only understand now).  She was living in the Phoenix area, and I went to meet her when I was there visiting my mother who lived nearby.  Gerda opened her heart to me.  We met whenever I was in Phoenix, and with Martin when he was there with me.

Gerda had every reason to be angry, bitter, depressed.  Instead she translated her painful traumatic past into a sensitivity to the pain others have suffered.  There is a Jewish directive “Tikun Olam”, to heal the world.  Gerda embodied that.  In 2000, she and Kurt went to Colorado to speak with the students of Columbine High School after the horrendous murder of a teacher and twelve students by two of the Columbine students.  She understood terror, she understood loss, she also understood the power of hope.  Mass murder has come now to her city, Buffalo.  She would have been there, with understanding, with strength.

In May I learned Gerda had died, a few months shy of her 98th birthday.  I had a dream about her – I rushed toward her and she enveloped me in her arms with an enormous hug.  And now there is a hole inside, along with the inspiration to be as warm and caring, as loving and generous as Gerda was.

I have learned that when we bring comfort to others, we reassure ourselves, and when we dispel fear, we assuage our own fears as well.

Gerda Klein, All But My Life