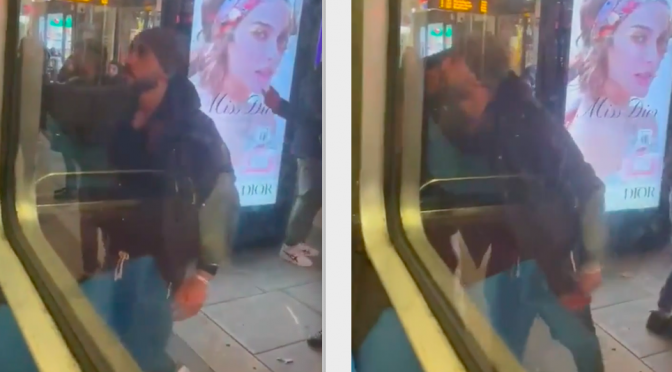 Photo:  Taken from a video by Joanne Orezi, from inside the bus, of one of the attackers.

Another attack on a synagogue in the States during Saturday Shabbat morning services.  An attack on a busload of Jews in central London.  Radical imams preaching hate, not just in Muslim countries; but now in a mosque not far from you.  Is there reason for hope?

Whether the attacker in Colleyville, Texas got what he was after – worldwide recognition for the terrorist now serving in a Texas prison – or whether he would have been a greater service to his family, we’ll never know.  The attack on the busload of young Jews in London was particularly egregious.  They were in central London to celebrate the holiday of Chanukah when a group of young men attacked their bus. Video shows the young men banging on the bus windows, spitting on the bus, and making unprintable remarks.

What did appear to be printable from the recording inside the bus was the comment the BBC interpreted to be “Dirty Muslims”.  It was in fact proven to be someone requesting, in Hebrew:  “Call someone, it’s urgent.”  Aside from the BBC assumption that those on the bus somehow provoked and – thus deserved – the attack with this comment, it is worth looking into the slur itself.  The adjective “dirty” as a slur, is usually followed by the word “Jews”.  As baptism is a Christian concept, some church clergy have historically used the term towards Jews, who are unbaptised, “unwashed”, and it has morphed into an antisemitic slur.  Presumably Muslims could also be characterised as such but is is not a slur a Jew would have used.

Had I found myself in that position I am sure I would have come up with a much more unprintable word than what the BBC claimed to have heard.  Jews, whether born and bred in the UK or elsewhere, live with an ingrained fear which history has reminded them again and again is what happens by their just being Jewish.  The difference this time was the belief that to “call someone” might actually mean that help would come.  It’s part of the pact that “freedom of religion” offers.

But do freedom of religion and freedom of speech include the right to espouse and promote hatred against another group?  Memri, the Middle East Media Research Institute, “Bridging the Language Gap”, publishes daily translations of what is going on in the Arab-speaking world.  (Their emailings now include also Russian and Chinese news.)  It is a way to understand what media leaders are saying to their followers.  There is some hopeful commentary but in the main it is pretty grim reading.

On December 24 Memri published their “2021 Editor’s Picks:  Top MEMRI TV Clips From The Sermons by Imams In The West Project”.  What was surprising was not the hatred, ignorance and lies spewing forth.  It was the locations of these particular imams:  Alexandria, Virginia; Aurora, Colorado; Liberty, Kentucky; San Francisco, Los Angeles, Orange County, and Elk Grove, California; Union City, New Jersey; Victoria, British Columbia, Canada.

In the main these are American-born or educated imams and scholars, many who had studied in seminaries in Iran and elsewhere, whose brand of freedom of speech advocates hatred against other Americans.  Yes, I know it’s not an original concept especially these days but there is enough hatred around without having to import radicalised ideas from abroad.  The hostage taker in Colleyville had been inspired by his mentor, now in prison, to carry out on American soil what she could not.  During her trial for terrorism-related charges apparently she asked to have jurors take a DNA test to ensure they were not Jewish.  (The request was denied.)  And interestingly, this attack in Corryville has strengthened her support, and her followers.

So is there hope?  At about the same time as the Memri video clips and the traumatic Chanukah celebrations came in, also came a story of hope.  If radical Islam is gaining a toehold in the West, the signing of the Abraham Accords between Israel and some of her neighbours has allowed an opening of the door for Arabs and Israelis to get to know each other.  Some Arabs now have an opportunity to visit Israel, to get to know the country and its people, to get to know Israeli and Jewish history and culture.

Fatema Al-Harbi is based in Bahrain and was invited to Israel by her online friends.  She became the first non-government Bahraini to visit.  In spite of the death threats she encountered returning home after her first visit to Israel, she went back, organised by the NGO Sharaka (“partnership” in Arabic).  She is quoted as saying:  “We wore our traditional clothes, so it was easy to spot us in the streets of Israel.  People we didn’t know at all kept approaching us, asking, ‘Are you from Bahrain or Dubai?’  They kept saying, ‘Welcome to Israel!’”

As Martin used to say, the French and Germans fought three horrible wars, and now you don’t need a passport to cross the border, or even know when you’ve crossed it.  The Middle East, he would say, will be like that also.

May 2022 be the year when hatreds (including antisemitism and hatred of Israel) be buried.