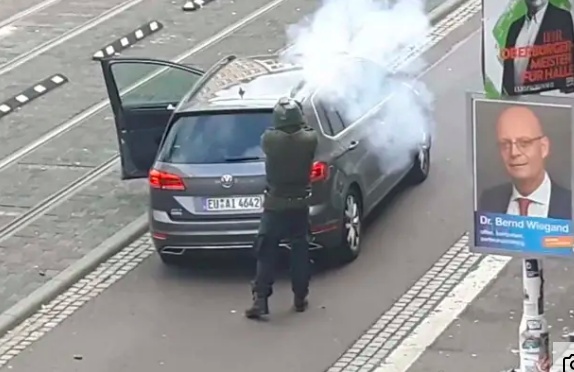 Stephan Balliet has proven what most Jews already know: Anti-Semitism is not about Jews. Rather, it is about those who are filled with hate. And basically that means hate for anyone – Jews are just the “miner’s canaries”: when Jews are targetted, other groups will soon be targets.

During the break between our Yom Kippur, Day of Atonement services in a synagogue in London, I heard that there had been a shooting at a synagogue in Germany. The friend who told me was especially concerned as her son had just returned from spending a year in Berlin and who had, with other young people, often gone to smaller communities to get to know the people there and give religious support to them. He was worried that some of his friends may have been in the synagogue in Halle that was attacked. Spending the day in prayer and contemplation, without any news from the outside world, the few of us who knew tried to wait patiently until the final service of the day when we could go home and hear what had happened.

It seems that Balliet, dressed for combat, had taken his weapons, his car, and his camera to record his killing spree and post it “live” on a gaming website. Finding the door to the synagogue impenetrable, he decided to use his bullets on anyone he could find, killing two people, one in a neighbouring kebab shop – certainly the last place to find Jews on Yom Kippur, the one fast day that most Jews around the world observe. He was out for blood, and believed that Jews, by their existence, were an excuse to dress up and play a murderous game of “us and them”. Feeling his self-righteousness justified, he was saving the world, with his gaming buddies cheering him on.

We had heard the news of this latest attack through our synagogue’s security guards. In nearly every Jewish communal building around the world, security is a fact of life. After last year’s shootings in synagogues in Pennsylvania and California, security in synagogues in the United States has also increased. In Israel, the main security is at the border, not unlike the Halle synagogue’s door which is open only to those who do not wish to harm those inside.

Hatred seems to be the one thing that has no borders, no limits and is truly colour blind – an equal opportunity employer. “Anti-Semitism” is hatred against Jews, a political term first published in 1879 by Wilhelm Marr. The term seemed more scientific then than “Jew hatred”, and is a term that is racial in nature as, at that time, assimilation into the wider societies in Europe was becoming possible for those willing to give up their Jewish religion, dress and manners. “Anti-Semitism” kept those who had assimilated within a recognisable Jewish racial grouping. This is not unlike the term used to separate Israel from other nations: Anti-Zionism, yet another facet of hatred, one on a national level, not necessarily an individual one.

People are not born hating, it is something they are taught. Feeling deprived, feeling alone, feeling angry and victimised, and spending time in a world where violent video games can be brought to life, and shared – this is not about Jews or other ethnic minorities. The “victim” becomes the perpetrator.