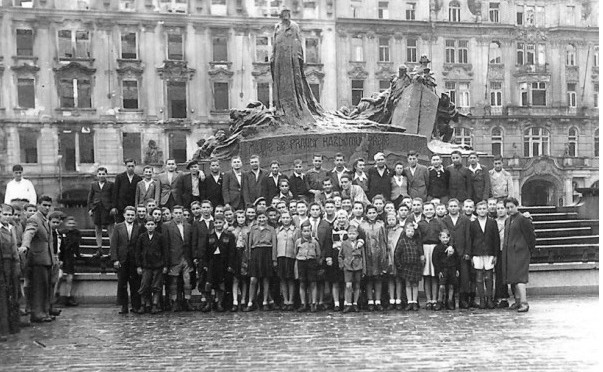 Photo: The Boys in Prague before their journey to the UK

Filmmaker Herb Krosney on The Boys. Letter to the Editor, Jerusalem Post,10 November 2019

“Regarding ‘World War II pilot’s heroic Holocaust secret revealed’ (November 6) about the flight to England of 732 Holocaust orphans, your readers might be interested in some background on the RAF footage.

“Together with the late Sir Martin Gilbert, author of The Boys: Triumph Over Adversity (and former president of the group), I directed and produced the film on ‘The Boys,’ released in 2004 and shown on different TV channels, including the History Channel, in 2004 and 2005. Gilbert was a long-time consultant to the Imperial War Museum. We discovered the unmarked RAF footage in the voluminous archives. It took a bit of time to identify the footage. When now-fully grown “Boys” were shown the footage and saw themselves as refugee children, they recalled their journeys to refuge in Britain. All were extremely excited to see the previously unknown footage that had suddenly ‘miraculously’ appeared from the dusty depths of those IWM archives.

“Without meaning to discredit the ‘heroic’ RAF service of pilot Halsey Roscorla, the flights were all peacetime flights. The first took place in August 1945, from Prague to Carlisle in England. A second flight flew from Munich to Southampton, and yet a third flight left from Prague to a few places in Britain.

“The pilots did a fine job in getting everybody safely from the hell of postwar Europe to the relative calm of postwar Britain. Granting permission for these 732 orphans to come to Britain was an outstanding humanitarian act of the British government. A few of The Boys later came to settle in Israel, a number migrated to the States, but most stayed and grew up in Britain. They meet each year in London in early May to celebrate their liberation, and there is a strong ‘second generation’ group that helps perpetuate the memories. They are all strong supporters of Israel.”