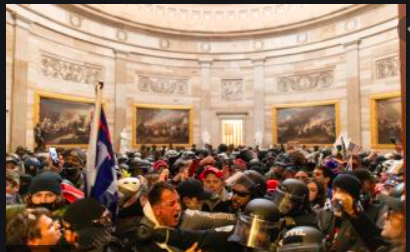 In August 2013 I was invited by the Churchill Centre to attend the dedication of an Oscar Nemon bust of Winston Churchill at the Capitol building in Washington. After the ceremonies, I decided to take some time to wander through the Capitol, a girl who had grown up in the wilds of Idaho, who had done all her formal education in the States, finally visiting that bastion of Democracy in “Our Nation’s Capitol”. I had been to Washington with Martin, even to George W. Bush’s White House when Martin spoke to his senior staff on Churchill’s war leadership (published here); I had never been inside the Capitol building.

I wandered, I looked, I soaked it all up; I even got the attention of more than one watchful security guard who asked if I was alright. Apparently not many visitors take time to view the Capitol with its art and architecture, all with such huge historic significance. Even though I have lived out of the country for more years than I lived in it, I was proud of what the Capitol stood for – where the democratically-elected men and women who represent more than 300 million people across a good part of a vast continent make equitable laws and oversee the welfare of their constituents and the American people as a whole.

My parents were immigrants to the United States. My father arrived in 1921 and my mother twenty years later. During one of my mother’s first experiences with a general election, when the outcome was not as she had hoped, my father consoled her: “You’ll have another chance in four years.” She told me that under the Soviet regime in which she had lived for two years, elections meant having one name on the ballot: voting for anyone else guaranteed a direct trip from the voting booth to the gulag. Democracy was not something my parents took lightly.

So along with much of the rest of the world, I watched in horror on January 6th when the Capitol building was stormed by violent people bearing weapons of mass destruction intent on creating havoc and disrupting the work that the Capitol housed and represented. Succeeding in attacking the symbol of American democracy – where the hijackers of United Flight 93, brought down in Pennsylvania on 911, failed – those who stormed the Capitol violated the security of American freedoms. They were not “protesting” against what they believed are in-valid election results – they were “breaking and entering” that most sacred of homes, the home of American Democracy.

Martin titled his book on excerpts of Churchill’s speeches “The Power of Words”. He, like Churchill, believed in words, what words mean, what works convey. He wrote: “I believe there is such a thing as true history.” Although he did not believe in the use of adjectives in the telling of history, his mentor on this occasion was Bishop Mandel Creighton (1843-1901) whose gravestone is inscribed: “He tried to write true history.” To Martin, “true history” is based on documents of what happened, flavoured by eye-witness accounts of those who had been there. To Martin, whose life was dedicated to the telling of “true” history, words have meaning.

There has been a lot of discussion about how polarised our world has become – the epitome of that was the violent storming of the Capitol building on January 6th. There has been too little discussion about how to bridge that gap, that chasm between people’s beliefs and their inherent character. And the essence of that polarity may well be in how people define “freedom”.

When I was growing up (in the “olden days”), there were two words that were not really articulated but were an understood part of our world: decency, and respect. Regardless of someone’s political perspectives or religious beliefs, education or economic situations, skin colour or hair colour, treating people with decency and respecting them and their views was a given. Maybe decency and respect and the ability to open our ears to others, to empathise, and to learn the facts of true history will be among the lessons of these dark Covid-infused times.

Read: The Will of the People