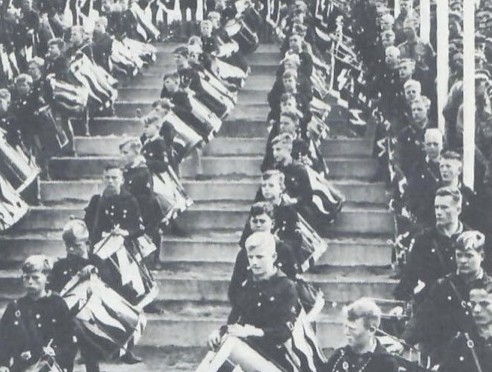 Through the years, in thinking and teaching about the Holocaust, I have viewed it as a way to see what human beings are capable of in regard to other human beings, both the evil and the good. Although an integral part of a wider war that also targeted other “undesirables”, the “Holocaust” was what happened specifically to Jews. Because Jews, both those who survived and those who didn’t, and historians – and the Germans themselves – recorded what happened, we have an amazing archive of documentation that is both intricate and far-reaching. This Holocaust documentation can teach us a lot about how human beings react when under unimaginable stress. But in taking the wider view of Jews as a symbol for humanity, we may have lost sight of who was targeted in the first place. What was Nazi hatred all about and how does that fit with who Jews are – then and throughout history? Is teaching about the Holocaust helpful in combatting Antisemitism?

Jews in Nazi Germany and German-occupied Europe didn’t just wake up one morning on the wrong side of the “us and them” divide. Nazi German propaganda trained a generation of German children to hate their Jewish school friends and even report on their own parents who didn’t follow the Nazi Party line. Nazi leaders believed they could create a Master Race of “Aryans”. The term originally referred to those who were Indo-Europeans, a sub-race of the Caucasian race, and evolved to mean the Nordic peoples of Germany, the Netherlands and Scandinavia. To the Nazis, “race” focussed on “Aryan blood”, eyes and hair colour, the shape of the head and nose, and height among other factors. Jews, among others, constituted another race that did not fit the Aryan racial profile.

Like other hatreds, Antisemitism tells us more about the accuser than the accused. Antisemitic tropes tell us that Jews are too powerful (or too weak), too rich (or too poor), too religious (or too assimilated), too tribal (or too scattered). Whatever adjective fits the situation works. Hatred is not logical. Nechama Tec, who survived in hiding with her parents and sister in Poland, asked her father why the Poles who hid and protected her family were still Antisemitic. She writes in her memoir Dry Tears: “My father tried to explain that the Homars, like most Poles, took anti-Semitism for granted. … He believed that the Homars hated an abstraction, the stereotype of the Jew, but not actual people like us, who happened to be Jewish. … We were not ‘typically Jewish,’ we did not conform to the image that phrase evoked for them. It did not matter that they had perhaps never encountered anyone who did conform to the image. … They simply treated us as an exception, which allowed them to keep their anti-Semitism intact.”

What is known now as “Antisemitism” has a long history. It predates Islam, it predates Christianity though in those early days it was more Jew hatred than Antisemitism. What is the difference? Judaism rests on three main concepts: first, a connection to a higher power who created the world and in whose image humans were created – a spiritual concept; second, a connection to community, the community of Jews who share a common ethics, common ancestors, a common history, a common destiny, a family or communal concept – peoplehood; third, a connection to the land from which they originated, a spiritual, communal and family home, a particular place that has been known as “Eretz Yisroel”, the “Land of Israel”. In 2000 years, Jew hatred has evolved and mutated to attack each of these three concepts.

Early Christians who swelled their ranks by converting Jews (and let us not forget that Jesus was Jewish) were afraid to lose members sliding back to Judaism, so they made Judaism abhorrent to their followers. “Dirty Jews” were “unwashed” (unbaptised) and were accused of killing Christ. In Arab lands, Mohammed was upset that Jews at the time didn’t include him as one of their prophets, so he was believed to have admonished his followers: “The Day of Judgment will not come about until Muslims fight the Jews, when the Jew will hide behind stones and trees and the stones and trees will say, ‘O Muslim, O Abdulla, there is a Jew behind me, come and kill him.’” Anti-Jewish hatred centred around Christian and Muslim religious beliefs.

It has been said that Moses was the first to download data from a cloud to a tablet. That particular tablet contained 10 basic commandments though it expanded to include no less than 613 commandments which cover every aspect of Jewish life and interaction. Those 613 commandments, codified in the Torah or the “Five Books of Moses” tell the history of the world, the history of the original Jewish family and their descendants, and is a user manual for how to live. Christians view it as the “Old Testament” and Islam has incorporated many of its ideas and stories into the Koran. It remains at the core of an ethical plan for human interaction.

In 1869, at the time when the Germanic view of an Aryan race was coming into focus, Wilhelm Marr, a German publicist, coined the term “Anti-Semitism”. Jews, many of whom had assimilated into German life, could thus be defined not by religion, which many had grown away from, but by race, by peoplehood. Anti-Semitism was “anti” their “Semitic” or Mediterranean race. Antisemitism has now come to mean all hatred against Jews but it is in fact a political, racial, term.

Those who have seen Fiddler on the Roof have seen a Jewish community that is connected by a common worldview, a connection between individuals, a willingness to help each other, a sense of a people distinct and yet bound together with a common history and a common destiny. Many Jews during the Holocaust had opportunities to escape and chose instead to remain with their families and their communities. Today Jews throughout the world recite the same prayers, in the same language, Hebrew, in which the prayers were written thousands of years ago. It connects them wherever they live, wherever they travel. Jews around the world have worked tirelessly to help fellow Jews in difficult circumstances, in their own country or elsewhere. It is through a sense of decency but more from a sense of connection, a sense of family, a common people.

It is that connection, that sense of peoplehood that has induced accusations that Jews have “dual loyalties” either in the macro national sense or between groups or individuals. Jews have, throughout their history, been separated from the general populations, physically, as the Jews in Venice who in the 16th century were forced to live in the first-ever ghettos, or socially where they were not allowed to mix with the general population. Protection, they learned early on, could only be relied on when it came from within their community. That also strengthened an independence from the wider world, a world that was often not very inviting.

The founding of the State of Israel in 1948 gave Jews the security of a national homeland where they could not be discriminated against and from which they could not be deported or massacred, a place where they would be safe as Jews to lead Jewish lives. The founding of the State gave Jews a sense of nationhood, a place where the three aspects of Judaism came together – a spiritual, religious identity in the place where the religion came to be; an ingathering of the exiles from many lands who connect as a people; a land that was mosquito-infested swamps and desert a hundred years ago and now exports food and technology due to cutting-edge water reclamation, irrigation, desalinisation and agricultural techniques, and medical, scientific, and technological advances.

Israel was born into and grew up in a dangerous neighbourhood. Millions of European refugees were resettled after the Second World War and have added to the societies of which they became a part. Middle Eastern countries had the same opportunity to resettle refugees of conflict, to connect to their fellow Muslims and share their space. That has not been forthcoming as we saw first with Palestinian refugees and recently with refugees from Syria and from the difficulties in Lebanon, and even now with Afghan refugees. Israel, on the other hand, has absorbed hundreds of thousands of Jews who had been living in Muslim lands. When Israel was established Jews in these Muslim lands found they were no longer welcome and Israel, newly established, absorbed them. Hundreds of thousands of former Soviet Jews many of whom had been imprisoned for wanting to emigrate came to Israel, and tens of thousands of Ethiopian Jews were brought there. They have added to Israeli society and they believe in a Jewish National Homeland where they can lead Jewish lives in peace. They are Zionists. Tragically, that has not gone down well in the neighbourhood.

Thus the third form of Jewish hatred, after anti-Jewish religious hatred, and political and racial Antisemitism, became codified in November 1975 with the United Nations Resolution 3379 which “most severely condemned zionism as a threat to world peace and security and called upon all countries to oppose this racist and imperialist ideology.” (https://unispal.un.org/UNISPAL.NSF/0/761C1063530766A7052566A2005B74D1) “Zionism” is merely the belief that Jews throughout the world and throughout their history have a Jewish National Homeland in the area in which Jews first settled – and maintained a presence for 2000 years – and toward which they pray. In 1991 this UN resolution was revoked. But “Zionism” is still an inflammatory word. This hatred of Israel is proving to be as insidious and as damaging as anti-religious Jew hatred and political Antisemitism.

Coming back to the original question, is teaching about the murder of 6,000,000 Jews a way to stop hatred of Jews? Is it even a vaccine against Antisemitism? Where does Zionism and the rabid hatred that term engenders sit with Holocaust education and Antisemitism? Have we had the wrong approach? Holocaust education may teach us about bullying, about hatred, about genocide, about crimes against humanity. It may teach us about psychology and neurology, about history and economics, about poetry and art – and these are important avenues to explore in the Holocaust. But it will teach us nothing about Antisemitism’s distortions because it teaches nothing about Jews and Judaism. The only way to understand hatred is to try to understand the hater and those who are hated. In most cases they are unrecognisable to each other.

For more on this read :

The Functions of Anti-Semitism

A hatred that dwells alone? Antisemitism debate cuts to heart of Zionist vision