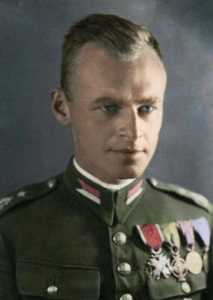 Jack Fairweather’s book The Volunteer, the story of Witold Pilecki, has what may be to many readers a confusing twist. Pilecki, a fighter with the Polish Resistance during the Second World War, volunteered to be incarcerated in Auschwitz in September 1940. It was part of a plan to report conditions and organise resistance within the camp. He did not realise what he was getting into; he barely escaped with his life, in April 1943. His story is an important one, a life dedicated to Poland, to seeing it a free country, free of external and internal oppression. Tragically, Stalin and the Polish Communists had other plans for post-war Poland. Pilecki was executed in 1947 by his own Polish countrymen.

The twist is that Pilecki’s story and his imprisonment in Auschwitz reminds us that Auschwitz is as much a Polish story as it is a Jewish one. The two wars Nazi German waged against the peoples of Europe, Jews and non-Jews, were separate, but connected by ideology and economics.

Elie Wiesel, a survivor of Auschwitz, defines the Holocaust: “Not all victims were Jews, but all Jews were victims.” The Holocaust, the planned total annihilation of Jews, deemed racially inferior to the Aryan German “Master Race”, the eradication of all traces of Judaism and “Degenerate” Jewish culture, meant no escape for the Jews of German-occupied or controlled Europe other than through death. Death was the final assault on them, after their homes and businesses were confiscated and their property and clothing stolen from them, followed by their treatment as slaves in labour camps and factories. I asked Rudolf Vrba once why the Jews were killed, when everything had already been taken from them. Why also their lives? His answer: “They had nothing left to give.” It was their stolen labour and livelihoods that helped to sustain the German war effort.

We forget that Auschwitz was more than that. It was to be the place of horror and barbarity for Nazi Germany’s other enemies and along with Europe’s Roma and Sinti peoples, the Poles, Slavs, Russians, Soviet Prisoners of War, among others. Any who took up arms against the Germans were shipped there. Many did not survive the deprivations; those who did were scarred for life, scars that, like those of Jewish survivors, has passed down to their children and grandchildren. Auschwitz is a Jewish story. And it is also a Polish one. Witold Pilecki reminds us of that.

Pilecki’s story also is a reminder of what can happen when a people are not united. Amazingly, from Auschwitz, he was able to get messages to Warsaw. Had those messages been relayed to the West, countless lives might have been saved. Auschwitz was a well-kept secret – no one knew where it was, what it was, or what happened there. It was not until June 1944 when Rudolf Vrba and Alfred Wetzler escaped and filed a report that reached the West that the secret was uncovered. Had Pilecki’s Poles been able to work with the Polish Communists, their combined efforts might well have saved lives. He might well have survived and had a proper place as one of Poland’s heroes, instead of death and virtual anonymity.

For more on Rudolf Vrba: https://www.martingilbert.com/blog/rudolf-vrba-and-alfred-wetzlers-escape-from-auschwitz-april-1944/

For more on the Poles in Auschwitz: https://www.martingilbert.com/blatt/sigmund-sobolewski-11-may-1923-7-august-2017/

For the Richard Cohen/Richard Langworth review of The Volunteer (with EG notes at the bottom):