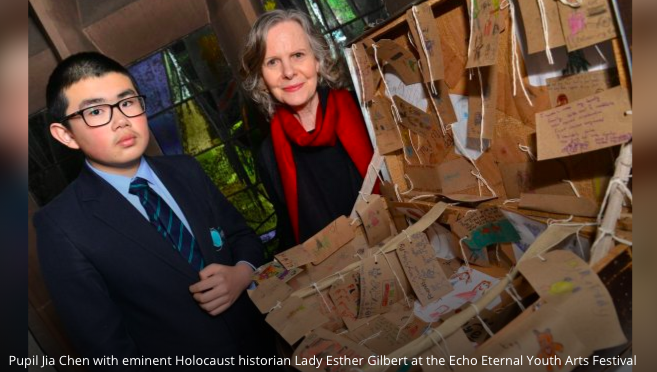 Photo: “The Suitcase of Past and Future” created by pupils at Parkgate Primary School in Coventry, based on Judith Kerr’s testimony and the difficult decision of what to take when leaving home. Photograph by Jon Mullis

Why is this night different from all other nights?

The Holocaust – what we need to know and what we can learn from it. From a talk delivered at Limmud UK

Part 2: Why the Jews and what can we learn from it?

Why did this happen? Why the Jews? There were many reasons; these are two of the main ones: racial, and economic.

To understand how Nazi Germany came about, it is important to know a bit about the period between the first and second world wars. It is a study in itself, but vital now to realise how losing the First World War affected Germans in their morale, their economy, their sense of nationhood.

Nazism may not have been inevitable, but the combination of propaganda of blame – enforced by brutality – sent a very powerful message to a people who were desperate for answers, and easy answers always go down well. The propaganda – now called “alternate facts” – began with a view that was very prevalent at the time – not only in Germany but in Europe, in the UK, and in North America: that of racial differences and the need to segregate and separate out “impure” bloodlines.

You do know that human blood is all the same? There are blood types, based on chemical composition but blood does not vary between races and nationalities. But to Nazi Germany, their slogan of “blood and soil” was a plan to create a master race connected to the soil, which they would settle and farm. The fact that other people were living on that land, and people who were not as “pure” as they were – this was not an issue for the Nazis.

Wilhelm Marr’s designation of “anti-Semitism” moved the attack from Jewish religion – which was becoming, outwardly at least, not that different from Christianity – to Jewish peoplehood. And the Nazis in Germany saw this in terms of race. In wanting to create a pure Aryan, master race, they were determined to weed out anyone they believed represented impurities in their bloodline. Jews were not alone in this – homosexual men, people of colour, Roma and Sinti then known as Gypsies, and mentally and physically disabled also came under those targeted to be destroyed.

According to Nazi ideology, the racial factor was reason enough for mass murder.

Can we talk for a moment about anti-Semitism as I think it’s something we can learn from those who survived it. Nechama Tec, from Lublin in Poland, survived with her parents and sister by being hidden by a Polish Christian family in nearby Kielce when she was about 12. In her memoir Dry Tears, she relates her father’s views about this Polish family, the Homars:

My father tried to explain that the Homars, like most Poles, took anti-Semitism for granted. . . . He believed that the Homars hated an abstraction, the stereotype of the Jew, but not actual people like us, who happened to be Jewish. . . . We were not “typically Jewish,” we did not conform to the image that phrase evoked for them. It did not matter that they had perhaps never encountered anyone who did conform to the image. . . . They simply treated us as an exception, which allowed them to keep their anti-Semitism intact.

She’s saying that anti-Semitism is not about the Jews, and it’s not about anyone who really exists. It’s a stereotype that by it’s nature is not real.

As an aside, we see that Anti-Zionism and Anti-Israel feeling which is happening today is the third aspect of what defines Judaism and Jews: Jews have the Torah or religion – which historically Jews were encouraged to give up and accept the Christ, or Mohammed; secondly, Jewish community and peoplehood – which Antisemitism targets, and thirdly, the connection to the land of Israel, now a target of Anti-Zionism and Anti-Israel sentiment.

Remember that stereotypes are not about actual people, they are about an image created by hatred and ignorance.

Nechama Tec became a noted Holocaust historian; the film Defiance about the Bielski Brothers who hid Jews in the forests in what is now Belarus, is based on her work.

So the first factor is racial; the second is economic: When someone gets their car fixed, or something fixed at home, they are usually charged for the materials and labour. Germany began the 1930s as an impoverished and indebted country and within a few years had the armaments to conquer Europe. How did that happen?

I’m not an economist, but when you take a segment of the population and remove them from the lifeblood of a community, there’s going to be a bit of extra dosh. The Jews who managed to emigrate from Germany before the war were allowed to take very little of their property. And what did they have: homes, businesses, furniture, clothing, artwork, musical instruments, pots and pans, Shabbat candles, and maybe some savings, investments – whatever. What happened to all of that stuff? In addition, after Kristallnacht, the Jewish communities were forced to pay for the damage to their communal buildings.

Rich or poor, the Jews had possessions, and throughout the conquered areas, those possessions came under German control. The Germans sold Jewish businesses for next to nothing to local people who also took their share of the spoils, and that also helped to guarantee their loyalty to their German occupiers. This robbery also deprived Jews of the wherewithall, the possibility, to fight for their survival.

Jews who were deported were allowed to bring a suitcase or maybe two – whatever possessions they could carry. How much stuff can people put into a suitcase they can carry, and remember this is before rolling suitcases? And how much are they leaving behind? Where did all of that go?

So that’s the materials; but the Germans also needed labour. Their young men were fighting at the front and someone had to run the factories and produce uniforms and armaments and help the war effort. Well, it happened that the Germans had a labour force on hand and one that they didn’t even have to pay. For a few calories a day, Jews and Poles and other conquered peoples were put to work as slave labour and if they died, there were millions more behind them.

In the Jews of Europe, Nazi Germany had a way to help finance their war, and rid themselves of what they perceived to be as a threat to their pureblood Aryan race.

Why do we need to know this? But what can we take from this? Why is this important?

First of all, the story of the Holocaust is a Jewish story, with a Jewish approach and a Jewish response.

What is Judaism based on? It’s based on a book, the story of a family and their travels and their troubles and how they are meant to lead their lives. The Jewish response to the Holocaust – and this is not always the response of other peoples who have been subjected to genocide – the Jewish response, during the time and after it, has been to document what happened, what happened to them, their families, their communities, in diaries, archives, memoirs and artwork that continue to this day. The “people of the book” have written thousands of books on their experiences.

The Germans wanted to take away from the Jews their humanity. The Germans took everything, and in Auschwitz they took their names, their identity, and human beings had to answer to their number.

Yet under the most unimaginable conditions of brutality, starvation, disease and fear, Jews in ghettos did everything they could to maintain their humanity. They had education classes for children, they had religious services and rabbis wrote religious responsa to the myriad of issues that arose, they had displays of art and musical events – none of which was allowed. But they did whatever they could do to give their lives meaning. They did whatever they could to survive, key to which was psychological survival.

Primo Levi was 25 when he was arrested in Italy and deported to Auschwitz. He writes in his memoir If This is a Man, of a lesson he learned from his friend Steinlauf:

. . . that precisely because the Lager [the camp] was a great machine to reduce us to beasts, we must not become beasts; that even in this place one can survive, and therefore one must want to survive, to tell the story, to bear witness; and that to survive we must force ourselves to save at least the skeleton, the scaffolding, the form of civilization. We are slaves, deprived of every right, exposed to every insult, condemned to certain death, but we still possess one power, and we must defend it with all our strength for it is the last – the power to refuse our consent.

We always have the power of our consent, even if it is only in our mind.

Those who survived, many of them children and young adults – because they’d had the best chance of surviving physically – those who survived might well have decided, after liberation, to rampage and be angry and destructive and murderous. Who could have blamed them? Did they?

Very few. They educated themselves, they married and raised families, they memorialised their families and their communities, they revisited those traumatic years by writing about them and speaking in schools and returning to Europe with young people. And for the most part, they remained Jews.

This is the Jewish response that is as old as Jewish history: survive, document, remember, educate, be Jewish and transmit the story – tell it to the children.

The story of the Holocaust is also a human story. The Holocaust is a lens through which to view human behaviour because it brought out the most evil known to humanity, and the most altruistic and moral behaviour of those who sought ways to resist the evil. Some non-Jews lived to kill; some died trying to save Jewish life. It’s an important study of what happens to people under traumatic conditions.

We are all tribal – we have our families, our circle of friends, our school, our country and we find comfort and security in those communities. Diversity takes bravery, to reach out to someone who seems different, but it makes for a rich environment. But when someone starts defining people by their tribe and separating communities, it is a danger signal. “Us and them” is never going to have a happy ending.

Tonight is the first night of Chanukah and so I’ll close with a Chanukah story. Hugo Gryn, who came to the UK with The Boys and later became a well-known Rabbi describes this incident. He was 14 at the time, with his father in a German camp Lieberose:

It was the cold winter of 1944 and although we had nothing like calendars, my father, who was my fellow prisoner there, took me and some of our friends to a corner in our barrack. He announced that it was the eve of Chanukah, produced a curious-shaped clay bowl, and began to light a wick immersed in his precious, but now melted, margarine ration. Before he could recite the blessing, I protested at this waste of food. He looked at me – then at the lamp – and finally said: ‘You and I have seen that it is possible to live up to three weeks without food. We once lived almost three days without water; but you cannot live properly for three minutes without hope.’