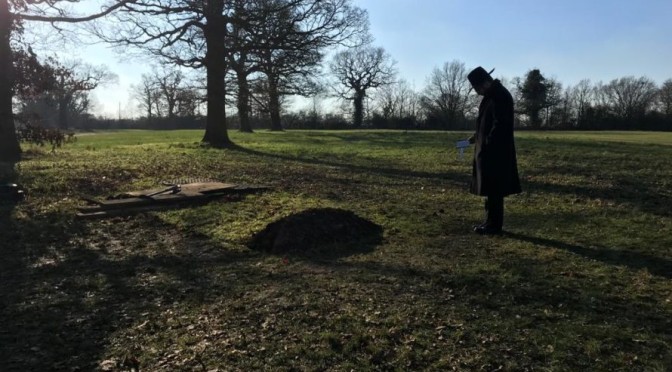 Photo: Rabbi Nicky Liss, Chairman of the Rabbinical Council of the United Synagogue, at the gravesite. Courtesy HMDT

Tens of thousands of events across the UK were supported by the Holocaust Memorial Day Trust, from speakers to exhibitions, from memorial programmes to projects, in schools, civic centres, churches and care homes.  This year’s theme was “Torn from Home” a tragedy shared by Cambodian, Rwandan, Bosnian and Darfuri survivors, along with Jews who experienced it during the Holocaust.

Lady Esther Gilbert attended the UK funeral for six victims of the Holocaust who were murdered at Auschwitz-Birkenau. The funeral was held on 20 January, which is also the anniversary of the Wannsee Conference.

The HMD website kindly allowed me to add a piece in response to the burial described above. READ HERE