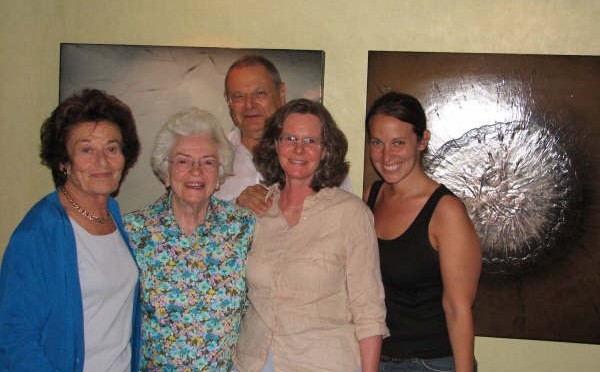 Photo: From the left, Gerda, my late Mom Helen Goldberg, Martin, and Gerda’s granddaughter Alysa Ullman on my left, 14 March 2006

On February 27, the Sandra Day O’Connor Institute hosted siblings Jennie and Randolph Churchill at the Arizona Biltmore in Phoenix, to speak about their great-grandfather, an event moderated by Laurence Geller, the Chairman of the International Churchill Society.

One of those who missed the event, though who was represented by her daughter and son-in-law, Vivian and Jim Ullman, was Gerda Klein.

Gerda Weissmann Klein, now in her 96th year, came to the United States as an “imported bride”.  Born in Poland, the only survivor of her family, she was liberated in Volary, Czechoslovakia by the Fifth United States Infantry Division. As she writes in her memoir of those years All But My Life, (published originally in 1957) of her liberator: “Shaking my head, I stared at this man who was to me the embodiment of all heroism and liberty. He greeted me. I must tell him from the start, I resolved, so that he has no illusions about us.   … ‘We are Jews,’ I said in a small voice. ‘So am I,’ he answered.”

Kurt Klein had been born in Germany but managed to emigrate to the United States in 1937. Sadly his parents could not leave and were murdered in Auschwitz. In 1942 Kurt enlisted in the United States Army and was the one who found Gerda when his unit liberated Volary. He and Gerda were married in 1946 and moved to Buffalo, New York where they raised three children.

For the next seventy-odd years, Gerda devoted herself to speaking about her Holocaust experiences, writing and being the subject of films. She has been honoured for her contributions and appreciated by those who have also suffered loss. It has been my great honour to know her and her family.

I met Gerda in Scottsdale where my mother was then living. Years before, my brother had given me a copy of Gerda’s memoir and I included it in my Holocaust Memoir Digest. My correspondence with her began when I sent her a copy of the work I had done with her memoir. It happened to come just after Kurt had died and she was in a particularly low period. She felt it had been Kurt who gave her the strength to follow her heart and speak about her early life and all she had lost. But slowly she found her feet again and travelled and spoke and brought her message of pain and hope and understanding.

Gerda writes: “I have learned that when we bring comfort to others, we reassure ourselves, and when we dispel fear, we assuage our own fears as well.”

Gerda was sorry to miss Jenny and Randolph’s talk and honour their great-grandfather Winston. They also missed meeting someone very special.

I am grateful to Gerda’s daughter Vivian Ullman for her recent communication.