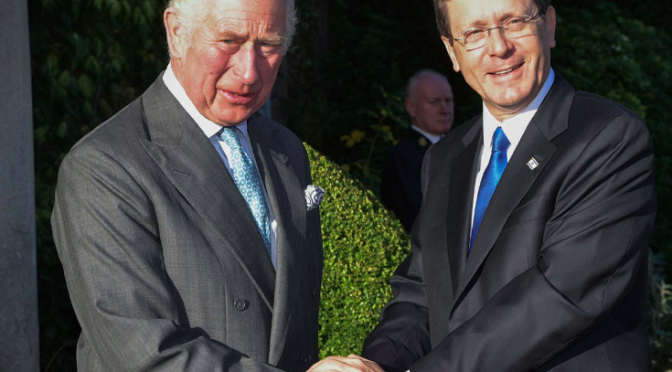 What gift does the President of Israel present to the Prince of Wales on his first visit to the UK as President?  What to give to a Prince?

But Princess Alice also has a close relationship with Israel.  In 1940 she entered the Greek Orthodox Church and her dying wish was to be buried in Israel, at the Russian Orthodox Church of Saint Mary Magdalene on the Mount of Olives in Jerusalem.  Upon her death in 1969 her wish was fulfilled.

Israel also has a close relationship with Princess Alice.  During the Second World War, from October 1943 when Athens was occupied by the Germans until December 1944 when Athens was liberated, Princess Alice hid three members of the Cohen family in her home.  Through the friendship of her late husband Haim Cohen to the Greek royal family, Rachel Cohen and her daughter Tilde and later her son Michel, found refuge with the Princess.

Princess Alice told her staff that Rachel had been the governess to her children.  Thus she was able to keep them safe.  When the Gestapo questioned her, Princess Alice used her deafness to pretend she could not understand them, and they left her alone.  In 1993 Princess Alice was honoured by Yad Vashem the World Holocaust Remembrance Center, for being one of the Righteous Among the Nations for saving the Cohen family.

The scholarship pays tribute to Princess Alice’s “compassion, deep spirituality, and immense perseverance to help those in need.”