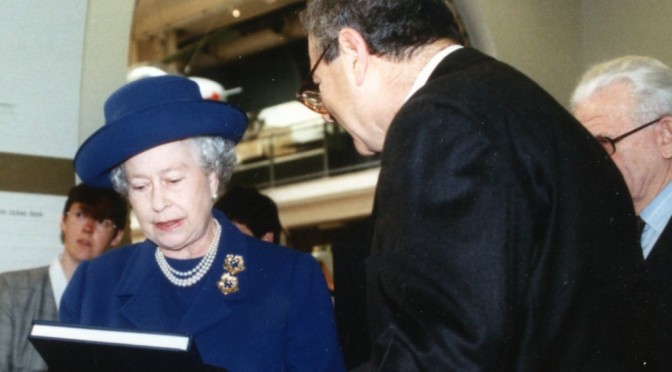 I am here on behalf of the IWM’s Director- General, Diane Lees, who I know would have wanted to be here but is away on leave. She asks me to pass on her very best wishes on this special anniversary.

Tomorrow marks the precise day – 14th August – on which ten Stirling bombers flew from Prague, Czechoslovakia, to Crosby on Eden, an RAF airfield just north of Carlisle, bringing three hundred young survivors of the Nazi concentration camps to this country.

For those young people it was the end of a nightmare lasting six years. Their parents, brothers and sisters had starved to death in ghettos, died from exhaustion, in some cases been brutally shot or simply disappeared without trace. The youngsters themselves had endured forced labour, terrible treatment in the ghettos and camps where they had been held. The sights they had seen were beyond imagination. Most were now completely alone in the world.

Let us try to imagine what it was like for those young people – who had never flown before – to find themselves transported in the fuselage of a bomber aircraft. What kind of experience was that? Well, today we can ask them and I have been doing that, as I am sure many of you have.

But there is other evidence too. By an amazing coincidence we have at the IWM a short section of archive film of the young people boarding the aircraft in Prague. So we can see that they all sat on the metal floor of the plane and that that there were tiny children among them. We have put the film on the IWM website this week so do take a look. On their faces are expressions of fear, worry, elation, uncertainty.

Happily many of those young people lived to tell their stories to the late Sir Martin Gilbert, the distinguished historian, who wrote up their story in his book The Boys: Triumph over Adversity. Sir Martin died in February this year – a sad loss for so many here today. How fortunate we are that Martin wrote that book – bringing the story of ‘the Boys’ and all they went through and achieved to a wider public.

One witness described how they could see through the plexi-glass bubble of the gun turret to see the countryside beneath. Another, Henry Golde, told Martin:

‘This was my first time on a plane and I was scared to death. Throughout the flight I had mixed emotions. Was I doing the right thing going to England? A strange new country, a language I did not know.’

From Crosby on Eden they were taken by bus to an unused wartime hostel near Windermere. Here they began their long recuperation – starting with fresh clothes and proper food, and eventually having lessons in English, current affairs, arithmetic and history.

The story has something of a fairytale about it.   But if we are tempted to think of Britain’s admitting these young children as a magnanimous act, we should remember – as Martin Gilbert points out in his book – that the government of the day had a ‘certain unease’ at the number of Jewish refugees arriving that summer.

Moreover the welfare officers of the day simply could not understand what those young people had come through, and sometimes thought they were exaggerating. There was no real precedent to draw on: who in their right mind would inflict such suffering on young defenceless children? The young people themselves were traumatised and in many cases sick. 40 were diagnosed as having tuberculosis and needed to be isolated.   It would be a long journey that lay ahead – but as we will hear from Ben Helfgott – it was one in which the triumph of the spirit, and the kindness of strangers, comes out loud and clear.

So what is the Imperial War Museum’s connection with this story? Well, back in the 1990s we set about creating a huge exhibition telling the story of the Holocaust. (It was our contribution to Millennium Year – when all of the national museums did something momentous to mark the year 2000.) Despite fifteen years now having passed since it was opened by HM the Queen, the exhibition remains exceptionally well visited.

I was there just yesterday and it was absolutely full. It is one of the few places in London where everyone is completely silent as they go round for an hour or two, taking in the dozens of films, photographs, maps, showcases with mementoes and testimony that we used to tell the history of those terrible times.

Back in the 1990s the team at the IWM who created the Holocaust Exhibition got to know many of the survivors of Nazi persecution who had somehow managed to get to this country. The ‘45 Aid Society was a wonderful way of being able to contact these people, and Ben Helfgott, as its Chairman, was a much-valued member of our five-strong Advisory Group. With his help, we were able to reach out to members of the Society and they were hugely generous with their help. Several were interviewed for the videos in the exhibition – telling their story to literally thousands of visitors. Others gave objects that they had kept from that time. Our contact with survivors is one of the very special things about working at the IWM and our files are full of amazing evidence of these interactions.   I think for example of the poems sent by Michael Etkind, and the little pen drawings sent by the late Roman Halter.

This story is particularly special for me as I am a Cumbrian by birth: my father’s family ran a watermill on the River Eamont near Penrith. When I first came across this story, I asked Ben Helfgott ‘so what was it like to reach the Lake District after so many years of terrible conditions in the ghettos and camps?’. Ben answered that it was ‘like arriving in heaven’.   Our team made sure this special Cumbrian story was featured in our exhibition. We realised that Joseph Finkelstone, a young journalist learning his trade on the Cumbrian Journal , had gone to Crosby on Eden aerodrome to cover the arrival of the young refugees, and the Carlisle Record Office were good enough to provide a copy of the newspaper in which his report appeared.   So – although it is a detail in the wider international story, nonetheless this moving British episode, which speaks so highly of the people of Cumbria, is there to be read and experienced by all our visitors.

I am very honoured to be here – and so pleased that this special anniversary is being marked so fittingly by Windermere Public Library.

Read More from Sir Martin on the Holocaust