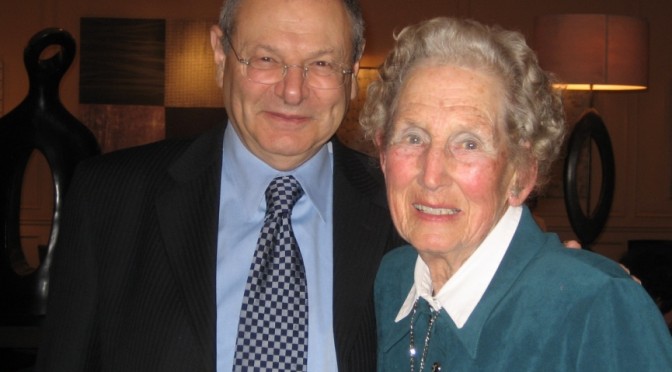 The latest edition of Finest Hour, “The Journal of Winston Churchill and his Times” (Number 183) contains an article by Cita Stelzer entitled “Working with Winston: The Unsung Women Behind Britain’s Greatest Statesman”. Cita Stelzer writes about Churchill’s secretaries, and she credits Martin with providing valuable sources on them for research.

In the film Darkest Hour, Elizabeth Nel is portrayed by Lily James in a role in which poetic licence is stretched, but still it shows her important role in Churchill’s office during the war years.

In 2008, I had the opportunity to meet Elizabeth Nel in what was to be her last trip to London as she died the following year. She had come to London with her daughter. For Martin it was a lovely reunion. Martin had visited her in 1984 in South Africa while filming the Churchill story there. At the time she had given him part of one of Churchill’s speeches she had typed and saved. This speech will be on display among other important documents at Hillsdale College.

Read More: In Search of Churchill