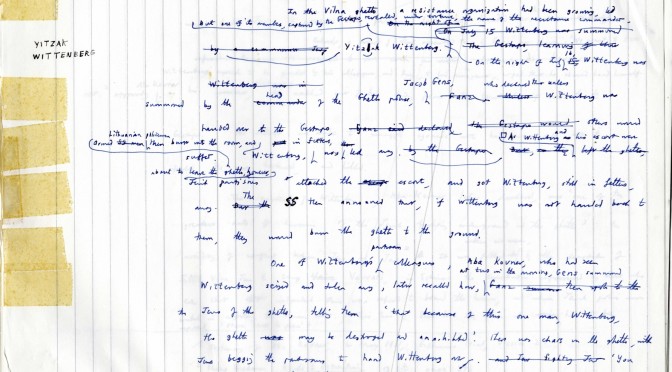 Photo: A page of Martin’s manuscript of The Holocaust

“To perish, but with honour” in draft

In those ancient pre-computer days, Martin wrote his books with “pen and ink”. He used legal pads, turned lengthwise so he could write across the page, ignoring what then became vertical lines. Each chapter had its own pad of paper, with many having pages taped along the left side. In this way he had space to make corrections, add sections, cross out lines, and tape quotations that had been typed and cut to size. Martin’s “cut and paste” was really cut and tape.

The photo below is the beginning of his Chapter 24 “To perish, but with honour” excerpted from his book The Holocaust, where we can see his creative process in action. In the book it becomes Chapter 30, and tells the extraordinary story of resistance, both the limited armed resistance Jewish partisans in German-occupied Lithuania were able to attempt, and that of “spiritual” resistance, of a surrender to certain death to save a community, and to prevent a community from being reduced to infighting.

In September 2001, Martin and I had the privilege of hearing this particular story in the very place it happened, from the renowned historian of Lithuanian Jewry, Rachel Kostanian. As we stood at the doorway in Vilnius of what had been the Jewish Council’s head Jacob Gens’ office in the Vilna Ghetto, we could look across the way to the building where Yitzhak Wittenberg had been imprisoned.

Rachel Kostanian has devoted her life to uncovering the history of what happened to the Jews of Lithuania, and has in the main single-handedly ensured that the true history is recorded for posterity. A “woman of valour” Rachel Kostanian spent her life in Jewish and Soviet-era Lithuanian archives amassing the evidence of crimes against humanity perpetrated by the German invaders and their Lithuanian nationalist collaborators. Believing the German propaganda that “Bolsheviks and Jews” were the enemy, and that by siding with Germany their aspirations for independence would be honoured, battalions of Lithuanians assisted in the murder of their fellow Lithuanian citizens who happened to be Jewish.

From 1944 when the Red Army “liberated” Lithuania until she achieved independence in 1991, both the history of Lithuanian Jewish life and its destruction, and the history of Lithuanian nationalism was expunged from what the Soviet Union allowed to be taught. As nationalism ignites in fragile countries, Jewish history is often the first casualty. The work that Rachel Kostanian has done, the books she has published, the museum exhibits she has curated and the archives she has discovered will remain a testament to this crucial aspect of Lithuanian life, culture and history. In the rush for nationalism and honouring nationalist heroes and national suffering during war, “true history” must be acknowledged, “warts and all”. Lithuanians, and all students of history, are indebted to Rachel Kostanian for her determination that the Jews of Lithuania their life and their loss, have a place and a name.

Half a world away, another woman is working hard to ensure that archives are properly catalogued, stored and made available. Sir Martin’s archives, including the hand-written manuscript for “Chapter 24” along with his other papers and materials, are being carefully unpacked and organised by Lori Curtis, the archivist at Hillsdale College in Michigan, the recipient of Martin’s vast collection of source material. Lori Curtis has been tenacious in searching out materials, most still in boxes, that researchers have requested, and is becoming familiar with the collection and its breadth. She will ensure that it will be properly maintained and made available for researchers for generations to come.

What Martin called “true history” is based on archival, documentary evidence. The maintaining of archives and the information gleaned from them must inform our knowledge of history, and thus our understanding of our own times.

For more on Rachel Kostanian, https://defendinghistory.com/the-green-house

For more on Sir Martin’s interest in archives: In Search of Churchill