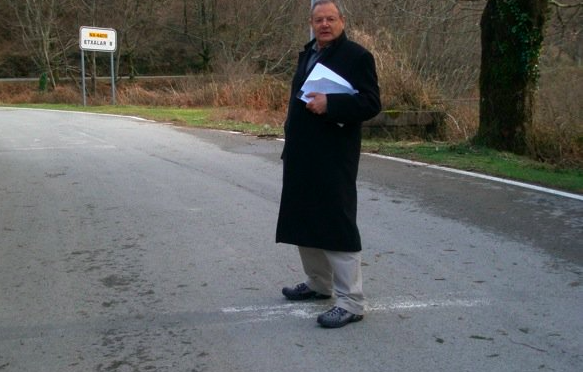 Martin’s first geographic adventure was when he was only three years old, crossing the ocean, without his parents, evacuated to Canada during the Second World War. It must have sparked a wanderlust in him because he loved discovering new places and connecting the geographic location to its historical significance.

Each of Martin’s journeys to historical sites involved hours of preparation to put together his “wodge” of maps, papers, guide books and historical research which he clutched in his hand or threw in a briefcase he tossed over his shoulder. For him, to stand at the spot where an historical event had taken place made it even more real to him. Whether a war memorial or plaque – and he always made a point of stopping and reading inscriptions – a battleground from the last century or centuries before, a cemetery, a synagogue, cathedral or mosque, a seat of government, a prison, each had significance for its historical value and for its relevance either personally or for humanity.

Adding to his travel adventures, in 2008 Martin was approached by an African-American filmmaker keen to do a documentary on Righteous Diplomats. These were diplomats working in embassies and consuls in Europe before the Second World War who were helpful and in many cases creative in ensuring Jews could escape what became the Holocaust. To Martin, learning about the diplomats meant tracking down their stories – and visiting the places they had worked. And what better way to travel through Europe on the trail of these diplomats than by train!

The following year the filmmaker, Michael King and his crew found descendants of the diplomats, as well as some of the survivors they had saved and we set off from London by train to locations in France, Italy, Hungary, Denmark, Poland and Lithuania. Martin was the historical guide and we were joined by Stephanie Nyombayire who had lost family in the Rwandan genocide. The history we recorded was both specific and had wider implications.

What an adventure it was – to be behind the scenes on a film, to meet survivors and hear about their routes of escape, to meet the diplomats’ descendants and hear how they had become involved in doing such righteous and courageous acts of rescue, and to do it by train to some of the most fabulous cities in Europe – and with Martin, and his wodge of papers! It was rewinding history to a geographic location, with those who had been participants, and with the historian who knew how to pull it all together.

In 2011, The Rescuers, Heroes of the Holocaust was produced. Michael King is now preparing to film a follow-up documentary, highlighting the diplomats not covered in The Rescuers. If you know of someone saved by one of the diplomats, please be in touch with him: <mking@michaelkingproductionsllc.com>

On July 1, I will be giving an alphabetical tour of some of these places and others that Martin and I visited, many which have a Jewish significance, and many of which can be explored further in his books. Some are well known places and stories, some are little known, and some may even be surprising. It’s a zoom. It’s free. It’s at the Sir Martin Gilbert Learning Centre so you can follow the link below to register.

We’re all itching to travel anyway. Why not follow in Sir Martin’s footsteps?