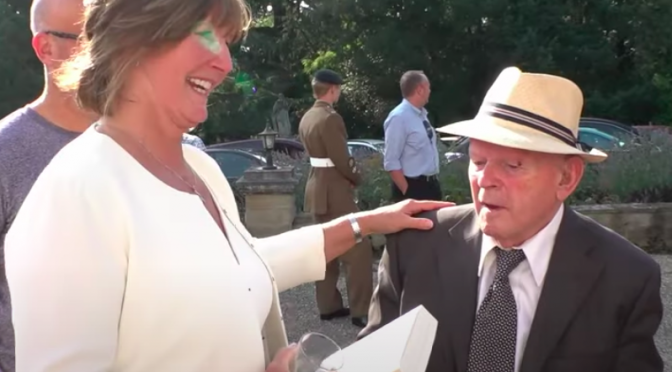 A short film, launched on International Holocaust Memorial Day on 27 January, shows a reunion and return of some of “the Boys”, child survivors who came to Loughton in Essex after the Second World War, where they spent time in a calm and peaceful environment as they regained their equilibrium after their losses during the Holocaust.

The film was made by the ’45 Aid Society, with the Epping Forest District Museum and the Epping Forest District Council, and shows some of the Boys and their descendants at a reunion there to mark an exhibition of their time in Loughton.  Now a family home, Holmehurst House served as a hostel to 26 boys who spent two years there, and became known as the “Loughton Boys”.

Martin’s book The Boys, Triumph Over Adversity, makes a cameo appearance as it is presented to the lady of the household Wendy Higgins.  The book describes the experiences the Boys had survived, the loss of their families and the terror and slave labour they endured, and what coming to Britain meant to them.

This May 2nd, the Boys will have their annual reunion, their first in-person dinner since 2019, in London.  The ’45 Aid Society which they established to help each other and to serve as a charity for others in need, now organises the event.  It is the most joyful Holocaust-related event as it celebrates the lives of these young survivors – now in their 90s – and what they have achieved.