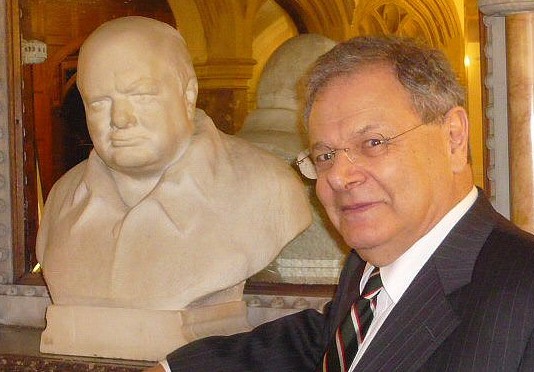 It is now nearly four years since Martin died, and six and a half since he published a word. But I am continually amazed at how his work and his reputation for being, in Dennis Prager’s words, an “honest writer” continue to hold sway and to be quoted, consulted, and relied upon. I have tried in these newsletters, to call attention to these varied “honourable mentions”, in the Web Citings below. I never know what will turn up, but something always does.

Because of the EU’s change in data protection laws, it seems that some online articles are no longer accessible. This has led to an exchange of emails with those publishers in order to get permission to see and quote from their articles.

Tommy P. Baer writes from Richmond, Virginia and sent me a scan of his article on Kristallnacht, and his quote of Martin in the Web Citings below. Mr Baer writes to me “It was my privilege to quote your husband and celebrated author in my op-ed piece. It is indeed from his book, Kristallnacht, Prelude to Destruction, the definitive work on this tragic event.” Mr Baer, an international lawyer and someone who has been recognised for his many humanitarian endeavours adds, “I was born in Berlin and was three months old on November 9.” As Martin would say, what might have those who had been killed done in their lives if they had lived?

Allison Richmond writes from The Mountaineer, mountaineer.com in Waynesville, North Carolina, to send me the information on the article “The war to end all wars”, and adds: “Thank you for reaching out to us and for your efforts to keep his work in the public eye. I have great personal respect for historians and the important work they do.”

While not a Web Citing, there was an “honourable mention” in Aurelia Young’s excellent book on her father the sculptor Oscar Nemon, Finding Nemon. Lady Young mentions Martin’s book Churchill and the Jews in which Nemon notes his discussions with Churchill at Chequers. Martin had told me that Nemon had offered to do his bust, but sadly Nemon died before it could happen.

Another “honourable mention” was found in the programme notes of the Memorial Concert for the 80th Anniversary of Kristallnacht and the Kindertransport held in London on November 22nd. The concert was held in conjunction with the Wiener Library, the Association of Jewish Refugees, and the Liberal Jewish Synagogue. In describing what Kristallnacht was, the programme notes:

“Historian of the Holocaust Sir Martin Gilbert called the 9-10 November a ‘Prelude to Destruction’ before the Holocaust. Kristallnacht is commonly translated as ‘the Night of Broken Glass’, or referred to as the November Pogrom in both German and English. In reality, neither term fully describes this unprecedented campaign of violence, dispossession and cruelty directed against Jews across countless villages, towns and cities in the Third Reich.”

When I thanked the Program Director of the Wiener Library and the event planner, Dr Toby Simpson, he responded: “I was delighted to refer to Sir Martin in the programme. He has always been one of my inspirations in my own modest historical studies.”

Martin continues to be an inspiration, as he was balanced in his perspective, scrupulous in his work, and generous with his expertise.