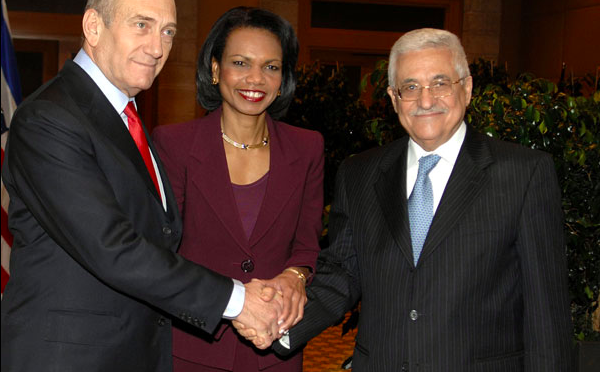 “You never know what’s happening behind the scenes.” This was Martin’s view of how political leaders manage – or not – to get things done. Negotiations are often delicate and there’s a lot of paddling beneath the surface before the ripples are apparent.

In July 2008, Gordon Brown, then Prime Minister, flew to Israel to meet with his counterpart, Ehud Olmert, and to deliver the first speech in the Knesset by a British Prime Minister. Martin and I were there for that historic occasion. Continue Reading Martin was held in such high regard by both leaders that we were invited to a presentation prior to their private dinner. What could each Prime Minister present to the other? What else than a Martin Gilbert book!

At that time the issues standing in the way of peace between Israel and the Palestinians in the West Bank boiled down to three main areas: a disputed border between the two; the status of Jerusalem which both claimed as a capital; and the return of refugees – mainly those Palestinians who had been displaced by the war at the establishment of the State of Israel. Martin and I knew how far negotiations had progressed. We had seen the map that divided Israel and the hoped-for state of Palestine; we sensed that the two other issues were close to being resolved and accepted. It all seemed so possible, so tangible, so real. (I am waiting for the day when the “West Bank” is a branch of the Palestine National Bank, and the World Cup will be held in Gaza. If you dream it ….)

And then things fell apart. Human strengths and human frailties got in the away. This prospect of peace evaporated before it was known how close it had been. And history moves on.

In mid-February, Professor Raphael Cohen-Almagor, the Director of the Middle East Study Group in the School of Politics and International Studies at the University of Hull in the UK hosted a webinar with former PM Ehud Olmert. It was titled “My Quest for Peace: ‘A Personal Account of My Negotiations with President Abbas’”. Introduced and moderated by Sir Tom Philips, a former British diplomat who had ambassadorial postings in Israel and many of her neighbours, it was a fascinating discussion into the history and the future of the region.

Former Prime Minister Olmert spoke for an hour. He spoke of the history of his relationship with Palestinian President Mahmoud Abbas including how Olmert’s invitations to meet had been postponed. Finally Olmert admitted his wife would be upset because she had spent 48 hours cooking in preparation for their dinner together. He described how he treated Abbas as a visiting dignitary, as head of state, and almost as Churchill described his approach to Stalin: “I have wooed Joe Stalin as a man might woo a maid.”

Olmert discussed the three sticking points, the border, Jerusalem, and refugees, and added also the issue of security. The border was delineated including a secure transit between what is now the West Bank and Gaza. A solution for Jerusalem was outlined, where each of the three monotheistic religions would be represented. Olmert had been Mayor of Jerusalem so he understood the situation very well. He described how Jerusalem is the only city in the world in which more than 40 diverse Christian churches are based. He spoke about the number of Palestinian refugees who could become Israeli citizens as opposed to citizens of the new Palestinian state, and how compensation would be paid, along with compensation for the Jewish refugees displaced from their homes in Arab countries at the establishment of the State of Israel. (See In Ishmael’s House.) And he spoke about the security situation – not that between the West Bank and Israel, but between the West Bank and Jordan to keep that border from being overrun.

There were questions, there were answers, there was a certain sadness that what had seemed so close at the time has now become an unknown aspect of the Arab-Israel conflict, an opportunity lost. The people on both sides of that nebulous border deserve better.

When asked about peace in the Middle East, Martin would say that France and Germany fought three horrible wars and now you don’t need a passport to go from one to the other – you barely have a sense of where the border is. This too will happen, he believed, in the Middle East. Eri Steimatzky told us his father had Steimatzky book stores in Beirut, in Cairo, in Alexandria and Damascus. Couldn’t that be possible again?

To watch this fascinating and important video: