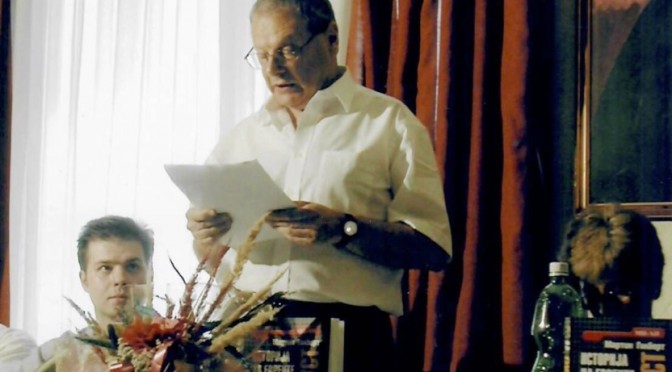 Photo: Martin speaking at the launch of his book The Holocaust, 2003, Skopje, Macedonia. Lubcho Lapé is to his right.

In memory of the 75th anniversary of the German occupation of Hungary, the Hungarian periodical Szombat is publishing the “Hungary” chapter in The Righteous, Unsung Heroes of the Holocaust, which will be serialised over a period of three months, translated by Attila Mislai.

Martin was very proud of his translations, which now span 24 languages. I was lucky to be at the book launch of one of these translations, The Holocaust, when it was published and launched in Skopje, Macedonia, in 2003. A press conference was arranged and along with journalists, there were members of the local Jewish community in the audience.

Martin had learned Russian as part of his National Service at the height of the Cold War, though he was always very secretive about what languages he spoke. At the press conference, Martin got up to deliver his remarks. He greeted everyone in Macedonian and there was a gasp of surprise and admiration. To the shock and delight of the audience, Martin continued and gave his whole talk in Macedonian. (We had a young man accompany us on our visit to Macedonia, Lubcho Lapé who helped Martin with the Macedonian pronunciation.)

After the press conference, the publisher Jovan Pavlovski took us off to a celebratory lunch, along with those who had worked on the book, and our travel companions from London, the author Ruth Cowen and historian Max Arthur. “Lunch” consisted of the Macedonian contingent simultaneously drinking, smoking, and singing along with a musician who had been brought in to entertain. As we ate, our Macedonian friends translated the songs for us, tears rolling down their faces at the beauty and sorrow of the love songs. In between the smoke and wine, the music and tears, and the overflowing plates, it was quite an event – something we hoped publishers everywhere would adopt!