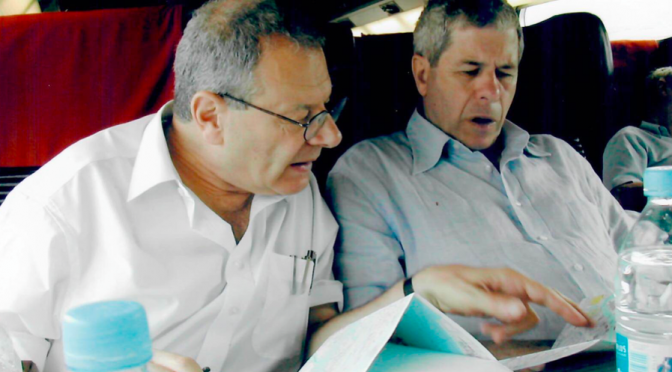 Photo: Martin and Max, consulting the map of their journey, June 2003

It began at a cafe in Hampstead though by the time I got to know them, their friendship was already close. Two historians of the twentieth century, focussing on the voices of those who had fought in the trenches and in the skies, discussing their respective work, sharing a sense of humour, the odd bottle of wine, and a love for 1940s-era war films.

Max’s found his voice in transcribing oral history of those who had fought. Some had left their recollections on tape, some he met and encouraged to tell their stories. “Forgotten Voices” became a series of books, of those who served in the First World War and the Second, the Royal Navy and D-Day, the Songs that kept them going, the photos that brought them back to life. He made their stories matter, and their losses and their accomplishments profound. Max ensured their voices would not be forgotten.

In 2003, Max’s friend Ruth Cowen was embarking on writing a book on Alexis Soyer, the Victorian chef whose portable cooking stove revolutionised battlefield rations in the Crimean War. To Martin, history was bound up with geography which meant a research “road” trip to Turkey. A “road” trip invariably meant a journey by rail: this one, from the Reform Club in London where Soyer revolutionised the kitchens and the cooking, to the museums of Istanbul and on to the Crimea in Soyer’s footsteps. Max and Ruth sailed from Istanbul on a creaky Soviet-era ship, the Heroes of Sebastopol, across the Black Sea, as Martin and I waved them off from the safety of solid ground.

During the years of Martin’s illness, Max was the one I called when things looked particularly grim. He always came and stood by me. “He’ll get through this. He made it through worse,” he would say. Maybe, I felt, if Martin knew Max was there, he’d have the last ounce of strength to pull through, hearing his comrade-in-arms from across no-man’s land. They were two scribblers who between the two of them had inscribed the names and accomplishments of hundreds if not thousands of soldiers, sailors, airmen, some lost on the battlefield, some after a well-lived long life. They understood strength and sacrifice.

Despite all the battlefield trauma he had heard and those old boys he had met, Max had an infectious love of life and an unshakable belief in the positive. He had a way of making everyone feel comfortable. He was genuinely interested. He cared. He was a friend, full of smiles, full of laughter and love. Those who knew Max Arthur carry around a very large and very quiet hole inside.