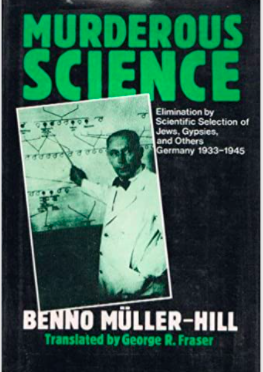 Photo:  The cover of the 1988 book Murderous Science by the late German Professor of Genetics Benno Muller-Hill, a pioneer in the examination of the scientific experiments undertaken by Nazi German scientists and doctors.

In my January 2020 newsletter, I posed the question whether the year 2020 would be one of “vision”, 20/20 being the standard for visual clarity. I guess the question for 2021, for nearly everyone on our planet having come through this life-changing year: What have we learned?

Last spring, while following the spread of Covid-19 as it seeped around the world, it seemed an opportunity to recognise how artificial borders are, how we are all inter-dependent on each other regardless of where we live, how we finally have the impetus to learn to live and work together. (If not now, when?)

Though this didn’t quite go to plan, one of the miracles of 2020 is how the worldwide scientific community began talking with each other and working together to try to understand this virus and create an antidote to it. There was a will, and a way was found. In the highly competitive world of medical science, the need to work together beyond the lab or even national borders, resulted in a group of vaccines that will save lives and livelihoods. 2020 teaches us that if we can work together, miracles can happen.

In the “war” against coronavirus, those on the frontlines who gave their expertise, their energy and in too many cases their lives, were health care professionals who tried desperately to stem the tide of rising death rates. It wasn’t always so. As the last all-encompassing worldwide conflict showed, health care professionals have not always followed the Hippocratic Oath to keep their patients “from harm and injustice”. As Richard Horton writes in The Lancet, “Medicine drove the incremental advance towards genocide.” Nazi German doctors and nurses, arguably the best in the world at that time, put the state and its view of society with its so called “racial purity” above the needs, the health, and the lives of the individual. Ashley K Fernandes, writing in Tablet, “sees the deplorable fact of physician involvement in the Shoah as an opportunity to highlight enduring moral lessons for the medical professions.” (Links for both articles can be found below.)

January marks two important anniversaries in the history of mankind, reminders of the vital and fragile role of health care professionals in implementing and executing the morals of their society. January 20, 1942 was the Wannsee Conference where the leaders of Germany’s “Third Reich” gathered to discuss and finalise plans for the systematic, industrial, scientific means and methods to “exterminate” Europe’s Jews; January 27, 1945 was the day the Red Army reached the gates of Auschwitz and the world began picking through its ruins to try to fathom what had taken place there.

These two dates in January, in 1942 and 1945 and the three years between them, have relevance in the discussion of what impact science and medicine can have, even in our 2020-2021 world. Both Drs Horton and Fernandes stress the importance of health care professionals being aware of what can happen when the dignity of the individual is taken away. They suggest the path to that awareness is by studying the Holocaust as it developed and expressed itself during those three particularly barbaric years. Dr Horton writes, “Teaching the Holocaust would be a starting point for reflecting on the meaning of science, service, and human dignity in medicine – indeed, the very meaning of a profession.”

Dr Horton quotes from the memoir of Dr Miklos Nyiszli, a Hungarian Jewish doctor, prisoner in Auschwitz, who was forced to do autopsies on bodies of Jews who had been killed by the medical experiments conducted by Josef Mengele. A harrowing memoir, it should be required reading of any visitor before entering the gates of Auschwitz, and every student in medical school. What is the nature of “science”? What is the nature of “medicine’”? Does the scientist or doctor serve the society, the cause, or the individual? Medicine during the Holocaust, and the laws enacted since then show the two possibilities. Dr Fernandes suggests: “The Holocaust should be studied by every health care professional as a reminder of how sacred the substance of our craft is, and what the consequences may be if we forget the dignity of persons again.”

Rudolf Vrba survived two years in Auschwitz and escaped in order to tell the world what was happening there, how hundreds of thousands of Jews were brought from across Europe to be murdered, either by gas immediately upon arrival, or to be worked to death. I figured he had seen more death than anyone I had ever met. I asked him why we die, what was the point of death? He answered: “So we appreciate life.”

For the millions of people around the world who have lost family members and friends either directly or indirectly from Covid-19, they did not need a lethal virus to appreciate life. For those who have been cared for by health care professionals, they appreciate the protections in place for their dignity as well as their healing. For those of us awaiting the vaccine, we are grateful that scientists have found a way to collaborate for the greater good. For those who study medicine and for those who teach about the Holocaust, there is a lot to learn. Together.

Read More: The Atlas of the Holocaust