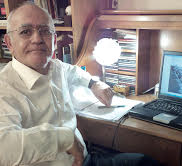 I’ve always been amateurishly interested in Jewish History, especially in the Holocaust and Anti Semitism; but began reading more extensively and deeply during the 90s. The Internet was not in use back then, so research and reading was confined to the few books I could find locally, purchase when I visited bookstores abroad, or a few titles I had asked friends visiting abroad to buy for me.

The prominent books at that time were usually academic stuff. However, I remember very well that of three most important books that were brought to me from abroad, one was Sir Martin Gilbert’s “The Atlas of the Holocaust.” That was how I was introduced to the work of Sir Martin Gilbert.

Beginning with the 2000s, when I joined the Holocaust Remembrance Committee of the Turkish Jewish Community, nearly all his books on the subject found their way to my library. When his book “In Ishmael’s House” came out in 2010, I bought it at once, as the setting of the book was so close to me geographically. I was impressed with both the content and style, and wondering whether Sir Martin could be persuaded to visit our community to speak about the subject, I invited him to Istanbul.

Last year, to honor the centennial of the Dardanelles campaign, I acted as curator of an exhibition called “Dardanelles, the WW1, and the Ottoman Jews”, and thus had to delve deeper into the history of the First World War.

Your gift, in this context has been very special for me, as it will be the most precious book of my collection on the subject. I hope to learn more by reading Sir Martin’s book and hope to gain a bit of wisdom from his scholarship.