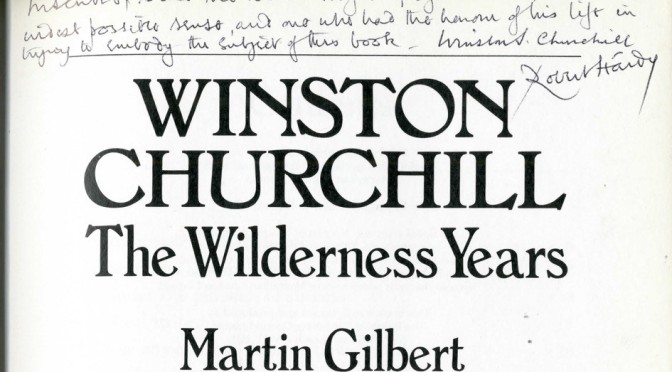 It was Robert Hardy, the great English actor who best portrayed Winston Churchill on the screen. Some actors capture the infamous scowl, the unlit cigar, the half-empty glass, but it was Robert Hardy who seemed to have got the man – as those who knew Churchill attest. Perhaps Hardy’s best Churchill portrayal was on the television programme The Wilderness Years. Not only was Hardy’s representation true to life, what he spoke was actually accurate and taken verbatim from Churchill’s words. The Churchill story presented in The Wilderness Years programme was published along with the context in a slim book by the same name, written by Sir Martin.

Robert Hardy inscribed a copy of the book to it’s author. Hardy wrote:

“Inscribed, since the author refuses, by a devotee in the widest possible sense, and one who had the honour of his life in trying to embody the subject of this book – Winston S. Churchill” and the signature “Robert Hardy”.

Now the Statesman, the Biographer, and the Actor are gone. Their rich legacies remain.