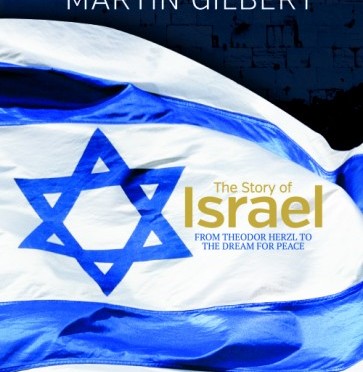 In honour of Israel’s birthday, Carlton Books has produced this exciting new and updated edition and is offering our newsletter readers a special discount of 30% direct from the Carlton website from 3rd to 30th April 2018.

On checkout add the code: story

Late last summer, Carlton Books got in touch with me. They wanted to bring out a new edition of one of Sir Martin’s most-loved books, The Story of Israel, and they wanted to do it in time to join in the celebration of the 70th anniversary of the State.

What followed was a three-month flurry of activity as together the editor Anna Darke and I found and identified new photographs, integrated the documents into the body of the work, and updated the text. Having produced three volumes of my Holocaust Memoir Digest some years ago, and having worked closely with Martin on his most recent books, I dove in and tried to keep this new edition in his style and with his attention to detail and authenticity. During that time Anna got married and honeymooned. I got older.

I felt a huge responsibility (as I guess I have with Martin’s work and legacy in general) to make sure this is a book of which he would have approved and been pleased. It was a huge struggle to forge forward on my own, without him. At the same time it was inspiring that Martin’s material could be brought back to life, still in his voice, and now in a new format. The history that he wrote has not and will not change because it is based on the facts of what happened, without opinion or bias or attitude.

From Theodor Herzl’s diary extracts of the first Zionist Congress through more than 100 years to the Israeli-Palestinian joint football team, this book graphically and colourfully describes the blood, sweat and tears of those who built their state and dream of living with their neighbours in peace. From the updated Acknowledgments to the updated Index (also now available on our website), this new edition brings new life to Sir Martin’s Story of Israel and new insights to his readers.

Thank you to Carlton Books, to those who live in and those who love Israel, and to Sir Martin’s readers, the established ones and the new recruits!