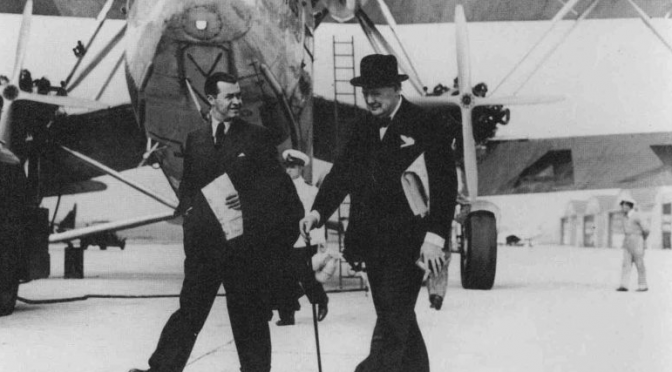 Based on a piece published in the Spectator on 17 March 2007 “Churchill was too fond of the Jews, It’s a nonsense to allege that the war leader was anti-Semitic” the following was republished with more clarifications by Finest Hour Volume 135, Summer 2007 edition:

In a press release announcing a book by Richard Toye on Churchill and Lloyd George, Cambridge University Press put its main emphasis on the discovery of a previously unknown article written by Winston Churchill in 1937, containing considerable anti-Semitic imagery.

The 1937 article, “How the Jews Can Combat Persecution,” was “unearthed by Dr. Richard Toye, a Cambridge University historian,” according to The Independent. “Written three years before Churchill became Prime Minister, the article has apparently lain unnoticed in the Churchill Archives at Cambridge since the early months of the Second World War.

“Churchill criticised the ‘aloofness’ of Jewish people from wider society and urged them to make the effort to integrate themselves….Churchill says: ‘The central fact which dominates the relations of Jew and non-Jew is that the Jew is “different.” He looks different. He thinks differently. He has a different tradition and background.’ He then criticises Jewish moneylenders: ‘Every Jewish money-lender recalls Shylock and the idea of the Jews as usurers. And you cannot reasonably expect a struggling clerk or shopkeeper, paying 40 or 50 per cent interest on borrowed money to a “Hebrew Bloodsucker,” to reflect that almost every other way of life was closed to the Jewish people.’”

In fact, this article has not “lain unnoticed,” and not one word of it was written by Churchill. Nor did the article ever appear in print, either under his name or that of any other. The article was written in its entirety by a British journalist, Adam Marshall Diston (1893-1956).

This fact was unknown to Dr. Toye, in whose new book on Churchill and Lloyd George the article appears as if written by Churchill. After the press release, I pointed out to Dr. Toye that not a single word of the article was by Churchill, and gave him Diston’s name. He replied: “Thank you for drawing my attention to what I hadn’t been aware of the article.”

It is astonishing that a professional historian should not be aware of the name of the actual author, a name that first appeared in the relevant volume of the Churchill biography, Winston S. Churchill, Companion Volume V, Part 3, The Coming of War: Documents 1936-1939 (London: Heinemann, 1982), page 670, which showed that the article was written in full by Diston.

Churchill, who was then writing on average an article a week, paid Diston—a journalist, a member of Sir Oswald Mosley’s New Party in its pre-fascist days, and a would-be Labour Party parliamentary candidate in 1935—to draft certain articles. Some of Diston’s other drafts were amended by Churchill and published with his amendments; a few were published unamended.

The article in question, “How the Jews Can Combat Persecution,” was however not published at all. This was fortunate, as it was offered for publication three times: twice in 1937, shortly after Diston wrote it, and once in 1940. Some have claimed the act of offering it to a publisher means that Churchill approved of it—but this was not the way his articles were offered.

In 1937, Churchill himself would not have offered the article personally. His private office did that, and was always most efficient. It is not clear that Churchill even read either the original or the retyped Diston article: neither have any markings on them by him, which suggests that he had not, since other Diston drafts are copiously red-penned.

In 1940, the then-editor of his war speeches, Charles Eade, unearthed the article and suggested he publish it. But Churchill, alerted to its anti-Semitic overtones by secretary Kathleen Hill, would not permit publication.

Someone else’s opinions, in an unpublished article, which never appeared in print under Churchill’s name, cannot be laid at Churchill’s door.

What were Churchill’s actual views on the Jews? In 1982 I published Churchill’s written instructions to Marshall Diston on what the article should cover. Churchill wrote: “Obviously there are four things. The first is to be a good citizen of the country to which he belongs. The second is to avoid too exclusive an association in ordinary matters of business and daily life, and to mingle as much as possible with non-Jews everywhere, apart from race and religion. The third is to keep the Jewish movement free from Communism. The fourth is a perfectly legitimate use by the Jews of their influence throughout the world to bring pressure, economic and financial, to bear upon the Governments which persecute them.”

Churchill had always urged the Jews to be good citizens, while retaining their faith and culture. His advice to his Manchester Jewish constituents in 1907 was: “Be good Jews.” He explained that he did not believe a Jew could be “a good Englishmen unless he is a good Jew.”

A year later, at the first public meeting he attended with his wife Clementine, a few weeks after their marriage, he told those gathered to open a new wing of the Manchester Jewish Hospital that he was “very glad to have the experience of watching the life and work of the Jewish community in England; there was a high sense of the corporate responsibility in the community; there was a great sense of duty that was fostered on every possible occasion by their leaders.”

Avoiding “too exclusive” an all-Jewish association was another consistent theme. Churchill welcomed Jews as part of the wider British community, and was impressed by how many accepted that challenge. His friend Rufus Isaacs became (as Lord Reading) both Viceroy of India and Foreign Secretary. But he was worried when Lloyd George wanted to include three Jewish Cabinet Ministers among the seven Liberals in his 1918 administration, writing to the Prime Minister: “There is a point about Jews which occurs to me—you must not have too many of them. Three Jews among only seven Liberal Cabinet Ministers might I fear give rise to comment.”

Keeping “the Jewish movement” free of Communism was another consistent theme. The prominence of individual Jews in senior positions in the Communist revolutions in Russia, Bavaria and Hungary had alarmed Churchill since the 1917 Bolshevik revolution. Writing about this in 1920 he urged the Jews to abandon Communism, and either enter into the national life of their own countries, as in Britain—“while adhering faithfully to their own religion”—or opt for Zionism.

Churchill regarded Zionism as “a very great ideal,” writing in 1920: “If as may well happen, there should be created in our own lifetime by the banks of the Jordan a Jewish State under the protection of the British Crown, which might comprise three or four millions of Jews, an event would have occurred in the history of the world which would, from every point of view, be beneficial.”

Churchill’s 1922 White Paper established that the Jews were in Palestine “of right, and not on sufferance.” During the Second World War he suggested appointing the Zionist leader, Dr. Chaim Weizmann, as British High Commissioner for Palestine (in 1910, as Home Secretary, Churchill had signed Weizmann’s naturalization papers).

Fighting persecution was also Churchill’s consistent advice to the Jews, at a time when he himself was being abused by Nazi newspapers in Germany for his outspoken criticism of Nazi racial policy. Some of his most powerful words in the House of Commons after Hitler came to power were denunciations of the cruelty of Nazi anti-Semitic policies.

Anti-Semitism was anathema to Churchill. In a letter to his mother he described the French anti-Semitic campaign against Dreyfus as “a monstrous conspiracy.” His main criticism of the Conservative Government’s Aliens Bill in 1904 was that the proposed immigration controls could be abused by an “anti-Semitic Home Secretary.”

When, in the House of Commons in 1921, Churchill spoke in favour of Jewish land purchase in Palestine, a fellow Member of Parliament warned him that, as a result of his advocacy, he would find himself up “against the hereditary antipathy which exists all over the world to the Jewish race.” This was indeed so: in 1940 a senior Conservative gave as one reason for Churchill’s unsuitability to be Prime Minister his “pro-Zionist” stance in Cabinet, protesting against the Chamberlain government’s restrictions on Jewish land purchase.

During the Second World War, Churchill suggested the removal of “anti-Semitic officers” from high positions in the Middle East. This led one of those officers, his friend General Sir Edward Spears, a Liberal MP, to warn this writer that “Churchill was too fond of Jews.”

Following the King David Hotel Jewish terrorist bombing in 1946, at a time of strong anti-Jewish feeling in Britain, Churchill told the House of Commons: “I am against preventing Jews from doing anything which other people are allowed to do. I am against that, and I have the strongest abhorrence of the idea of anti-Semitic lines of prejudice.”

These were Churchill’s consistent, and persistent beliefs. As he remarked when his criticisms of Jewish terrorism in Palestine were being discussed: “The Jewish people know well enough that I am their friend.”

This was indeed so.

Read: Churchill and the Jews