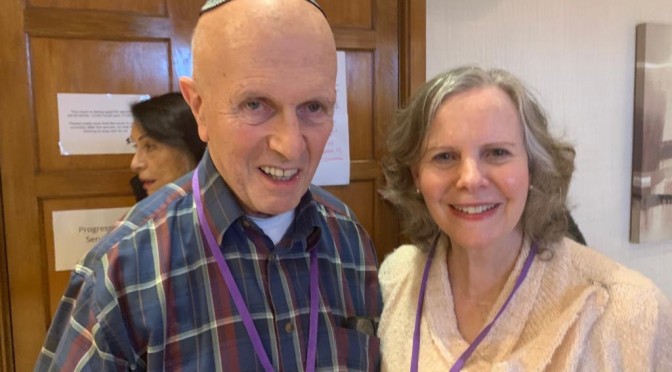 The Holocaust – what we need to know and what we can learn from it.

From a talk delivered at Limmud UK, Part 1: What happened?*

Welcome! I am Esther Gilbert. I was married to the historian Martin Gilbert who wrote 12 books on different aspects of the Holocaust, among his 88 published books. I am named after my grandmother Esther Chaya Shapiro who lived with her family in a shtetl, a small town in what is now northwest Ukraine. On a bright August day in 1942, two weeks before the Jewish New Year Rosh Hashanah, Esther Chaya, her husband Berel and their daughters Mindel, who was 22 and Dena who was about 14, were taken, along with 10,000 other Jews from their town, from a few surrounding towns and Jewish refugees among them, to the forest near the edge of their town, where they were killed. In trying to learn more about Esther Chaya, her life and her death, I came to Martin and his work and developed an interest in survivor memoirs.

I wanted to learn what happened, not only the deaths of my family members but what happened across Europe to millions of Jewish families, how it happened, why it happened, and how we can make some sense of this, how we can put this history into perspective and apply it to our own lives today.

There were four phases, or developments that the Germans enacted between 1933 when the Nazi Party came to power – and remember they were a democratically-elected government that quickly morphed a totalitarian brutal and all-controlling state – 1933, and 1945 when Germany surrendered and the war in Europe was over.

The first was the Nazi German policy of Emigration, or “encouraging” Jews to leave Germany. Within months of their coming to power, laws were enacted that separated and impoverished German Jews and withdrew from them the rights of citizenship – rights citizens have to be protected, rights of equal treatment under the law, rights that allowed legal recourse from brutality and harassment – all removed. Jews were excluded from all aspects of German life, professionals lost their jobs and their livelihoods, Jewish businesses were boycotted, and Jews were not allowed to marry non-Jewish Germans.

Between 1933 and the beginning of war in 1939, half of German’s 650,000 Jews emigrated and survived – that’s more than the complete Jewish population of Britain today. Nearly 52,000 came to Britain, and more than 33,000 to British-Mandate Palestine.   Among those coming to Britain were 10,000 children who came on the Kindertransport, as a direct result of Kristallnacht, the night in November 1938 when every synagogue throughout Germany was destroyed and 30,000 Jews were arrested and imprisoned. Martin described Kristallnacht as “a brutal, hysterical, uninhibited assault on everything Jewish ….”

What was that feeling like, to see your country transformed? Ingrid Kisliuk who was 8 years old when Adolf Hitler and his Nazi troops marched in to Austria in 1938. She describes her impressions in her memoir Unveiled Shadows:

When the motorcade appeared with Hitler standing in a convertible, his arm raised in his Nazi salute, the masses went into a frenzy . . . . Indeed, the view of the street overflowing with people screaming their approval and devotion to this man Hitler, was at once terrifying and riveting.

Ingrid survived with her family in hiding in Belgium. After the war she went to the United States.

In August 1939, Germany made a pact, an agreement of non-aggression, with the Soviet Union to divide up Poland: the Soviet Union moved into what is now Lithuania, Belarus, and Ukraine, reclaiming their ancient Czarist lands. And in September, Germany invaded Poland, over land and by air, conquering it in a matter of weeks.

In Germany before the war, the Nazis brutalised Jews and whoever disagreed with their Nazi Party. In Poland, the Germans viewed the Poles only slightly better than they viewed Jews, brutalising and starving both groups, continuing their policy of pitting countrymen against each other by building on the prejudices of the local populations, and controlling the amount of resources – mainly food – available to all of them.

By 1940 the Germans began setting up ghettos in cities and towns throughout Poland, and moved Jews into them: this was the Germans’ second policy, their second solution to the Jewish Question: Ghettoisation: lock the Jews into ghettos and control all entrances and exits, control amounts of food, medicine, and heating fuel that went into the ghetto, so that slowly starvation and disease would take its toll. By 1941, 4,000 Jews were dying every month in the Warsaw Ghetto, the largest of the many hundreds of ghettos.

Each ghetto was administered by a council of Jews whose only purpose was to carry out the German orders; each ghetto was policed by Jewish policemen, so those enforcing the Germans’ orders and facing the hardships caused by those policies, were Jews – not the Germans.

Jack Klajman was 8 years old in 1939 when the Germans invaded Warsaw where his family lived. By 1943, he and his younger brother Eli were the only survivors of their family, having lost their parents and three older siblings. Jack tried to take care of Eli, which he describes in his memoir Out of the Ghetto.

Jack to his little brother Eli: ” ‘You are only ten years old. I am twelve. When you get to be my age, I’ll let you smoke and drink, too,’ I said facetiously as we both smiled. Then a look of concern came over his face. ‘What if I don’t make it to twelve?’ he asked.”

After the war, Jack Klajman came to Britain as one of “The Boys”, Jewish survivor orphans brought to Windermere in the Lake District and other areas in the UK to be rehabilitated together. He eventually emigrated to Canada. Eli did not survive. As I was preparing this talk, I heard that Jack Klajman had died.

In June 1941, the Germans, having conquered most of the whole of Europe, tore up their Non-Aggression pact with the Soviet Union and invaded those territories.

Along with the invading German army came a group who had been specially trained – it was their job to machine gun people – Bolsheviks and partisans who were fighting against them, and Jews. These Einsatzgruppen, as they were called, consisted of 3,000 men covering an area that now comprises Estonia, Latvia, Lithuania, Belarus, and Ukraine. In order to do all that killing, they had help from local Lithuanian, Ukrainian and other collaborators who helped to round up Jews – like my grandparents – in their towns and take them to nearby forests and ravines where they were shot. This was the Germans’ third policy of annihilation: death by bullets.

Leon Wells was 17 when he was forced to work in the Sonderkommando at Janowska Camp near Lviv in what is now Ukraine. Janowska began as a slave labour camp; later Jews were brought there either to be killed or to be deported elsewhere.

The Sonderkommando, or “Special Commando” were forced to dispose of the bodies of those who had been killed. In Leon’s memoir, The Janowska Road, he describes how in some cases death was a relief from the continual tortures:

“But I should like to emphasize again that usually the people undress themselves quickly and go to the fire without protest. Some of them even jump into the fire without an order to do so. They have had enough. The tortures have been going on too long. Most of them have already lost all their near ones, and everyone feels that the world is his enemy; even the children in diapers feel this.”

After the war, Leon Wells testified at both the Nuremberg Trials and the Eichmann Trial in Israel. His memoir is based on a diary he kept during the war.

Number 4: On January 20, 1942, the heads of all German ministries met at the Wannsee Villa near Berlin. At that point Germany had conquered Denmark, Norway, Holland, Belgium, France, Luxembourg, what was then Yugoslavia, and Greece. Hitler was so confident of victory that he had declared war on the United States only weeks before.

The focus of the meeting was the Jews in Western Europe who, though living under a brutal occupation, had not yet had to contend with mass murder. It seems that killing by bullets and other means as Leon Wells describes, was not as efficient as the Germans wanted. Also, it was thought that the neighbours in cities like Amsterdam and Brussels and Paris might not be as helpful in the killing process as the Eastern Europeans had been.

These government ministers met to discuss plans for another policy, another solution to the Jewish Question: a more efficient, a more impersonal form of killing: that of using poison gas in air-tight concrete rooms and burning the bodies in crematoria. This was to be the “Final Solution”: Jews would be brought from Northern Europe, Western and Southern Europe and those left in Poland, deported by trains to some secret “unknown destination”, “somewhere in the East” where they would supposedly be housed in work camps. In fact, they were killed in these so-called death camps immediately upon arrival in most cases: Chelmno near Lodz, Treblinka near Warsaw, Belzec near Lvov, Sobibor north of Lublin, Maly Trostenets near Minsk in what is now Belarus, Majdanek near Lublin and Auschwitz-Birkenau near Cracow.

Rudolf Vrba was17 when he was deported from Slovakia to Auschwitz where he survived for two years. In his memoir, I Cannot Forgive, he describes a transport of Jews arriving from France at the ramp where he was working to unload the trains. A truck overloaded with dead bodies passes into their view and Rudi witnesses their reaction:

“. . . simultaneously from those 3,000 men, women and children, rose a thin, hopeless wail that swept from one end of the orderly queue to the other, an almost inhuman cry of despair that neither threats, nor blows, nor bullets could silence. . . . the lorry cleared the tracks, disappearing out of the arc lights, into the darkness; and then there was silence, absolute and all-embracing. For three seconds, four at the most, those French people had glimpsed the true horror of Auschwitz; but now it was gone and they could not believe what their eyes had told them. Already their minds, untrained to mass murder, had rejected the existence of that lorry; and with that they marched quietly towards the gas chambers which claimed them half an hour later.”

They see something that is beyond their imagination, and yet within moments they succumb to silence, to doubt, to disbelief, and to doing what they are told.

Rudolf Vrba and his friend Alfred Wetzler escaped from Auschwitz in April 1944 with the purpose to bring the news to the outside world that Auschwitz was a death camp. News had filtered out from Chelmno, from Treblinka, that people were being killed there, but no one knew what Auschwitz was, “Auschwitz” was a German name and not to be found on any map.

And every week trains from France and Belgium and the Netherlands and Theresienstadt near Prague and Greece brought unsuspecting Jews to Auschwitz. The Vrba-Wetzler report, combined with the report by Czeslaw Mordowicz and Arnost Rosin who escaped from Auschwitz in May, reached the West in June 1944 just after the D-Day landings and is one of the seminal documents of the Holocaust.

Those are the four Nazi German policies: emigration before the war; ghettoisation in Poland where death happened by mass starvation, disease, and brutality; Einsatzgruppen machine-gunning in the East; deportation to death camps for murder by poison gas.

*Part 2: Why the Jews? and Part 3: Why do I need to know this? will be presented in subsequent newsletters.

The Atlas of the Holocaust