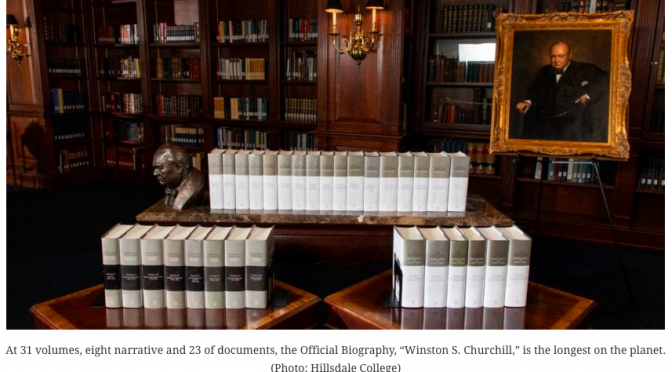 Photo: At 31 volumes, eight narrative and 23 of documents, The Official Biography, “Winston S Churchill”, is the longest on the planet. Photo: Hillsdale College

Martin called it his “life’s work”. He worked on it throughout a 50 year span, devoting many years to researching and writing, footnoting, indexing, mapping, and fundraising to be able to complete it. It is a work of scholarship and the basis for any authentic study of Winston Churchill. After Martin died, Laurence Geller, Chairman of the International Churchill Society, and I wondered what question Martin would have for Churchill when they met in Heaven. We decided that it would be a specific question as to what Churchill was thinking on that (pick any) day in that (pick any) month, or year. Martin was so in tuned with Churchill’s movements and meetings that we almost believed he could remember each day and any queries he had about what Churchill had been thinking.

But when asked what Churchill “would have thought” about any particular current event, Martin would always respond that he never knew how Churchill was going to react to any of the things he dealt with. Martin said he opened each new file of Churchill papers never knowing where it was going to lead, or how Churchill would respond. It must have been that curiosity about his subject that kept the biographer riveted for so many years – a relationship that never soured or went flat, as Winston Churchill led Sir Martin through the intricacies and complexities of the Twentieth Century.

In his Finest Hour article of 2010 “The Biographer in Waiting”, Martin tells the story of those dramatic days in 1968 and the preparation for Randolph’s son Winston to take on the writing of the biography. The article was written only a few months after Winston had died. (For more on how Martin became the biographer, please see In Search of Churchill, https://www.martingilbert.com/book/in-search-of-churchill/)

The “official” biography is made up of eight volumes of Churchill’s life, two written by Randolph and his team of researchers, Martin among them, and six by Martin. In addition, 23 volumes of documents include those that are quoted in the eight volumes of biography. The first five volumes of documents connect to Randolph’s two volumes; the following twelve volumes of documents bring the story up to the end of 1942 with volume 17. Martin became ill with only a few footnotes remaining to be found. Dr Larry Arnn of Hillsdale College and his team of young “Churchill Fellows” completed the 1942 and the succeeding document volumes to the end of Churchill’s life, bringing the number to 23. 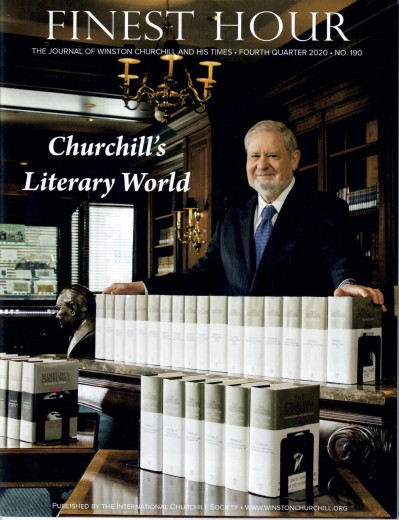 Larry Arnn had worked as a researcher for Martin in the late 1970s, married Martin’s secretary – Martin said he only realised something was up when he saw Penny climb on the back of Larry’s motorcycle – and maintained a friendship wherever life took them.

On 28 June 1979, Larry wrote to Martin about the biography:   “I only know that it would be a shame if you did not finish this magnificent work. It will be, I am convinced, a landmark in the art of writing biographies. Many of the problems that attend upon your work – the embarrassment of information, the proximity of the events studied to our own time, and their consequent aptitude for inspiring controversy, the necessity to portray the life of one man in its relation not only to national, but to global affairs – reproduce themselves in a lesser form in the lives of all 20th century political men. You deal with these problems with an even hand, an honest heart, and a tireless industry. I hope you will find a way to finish the work as you have begun it. It will give me satisfaction to assist you however I can.”

Knowing Larry Arnn, I cannot say he regrets that offer, and he certainly did not forget his commitment to his friend. In 2019 the final volume of documents was completed 40 years after his letter. A triumph indeed. Three generations of biographers worked on it, countless editors, typists, friends and colleagues saw it through to the finish line. And there it will be, for all time.

Finest Hour, the Quarterly Journal of Winston Churchill, has highlighted its Winter Issue on the Official Biography. Richard Langworth, the former editor and long-time Churchill collaborator has written a piece on the “Triumphant Story” of the biography: